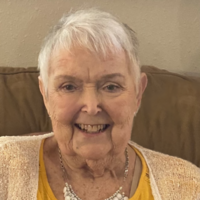 Private interment will be held at a later date.

Jan was born on June 5, 1936, in Dickinson, North Dakota to Hazel Loretto (Murphy) and Albert Timothy O’Keefe.  She was the eldest of seven children. Her early years were spent in Dickinson and Devil’s Lake.  The family settled in Aberdeen, SD.  She was a 1954 graduate of Aberdeen Central High School.  She graduated as a nurse from The College of St. Catherine in 1957.  She returned to Aberdeen and worked at St. Luke’s Hospital OB while completing her bachelor’s degree at Northern State College. She also was a clinical instructor for Presentation School of Nursing.

While working at St. Luke’s, she met Neal Auble. They were married on May 30, 1959, and moved to Fort Defiance, Arizona while Neal served with the Public Health Service. It was while they were in Arizona that they welcomed Joseph, the first of six children in 1960. After completing his service, they returned to Aberdeen where they welcomed Clare, Anne, Martin, and Mary. They moved to Mobridge, SD in 1966, where they welcomed John (Amen Auble) in 1967.  Neal and Jan divorced in 1981.

While raising their children, Jan worked for the Mobridge Care Center in several capacities including, Director of Nursing.  After she retired from the Care Center, she served as a nurse for the Aberdeen Area Youth Treatment Center until her retirement in 2012 at the age of 75. She continued to nurture young nurses by helping with the gerontology course at NDSU Nursing at Sanford Health Bismarck.

Jan was an active member in her community. She was instrumental in bringing Girl Scouts back to Mobridge as well as being a den mother for Cub Scouts. She was an active member of St. Joseph’s Catholic Church, as well as Jaycettes, the Hospital Auxiliary, and Arts and Travel Club. She was an avid reader, recording the books she read in journals. It was this love of reading that called her to volunteer with the Mobridge Adult Education Program to teach those who were unable to read. She also shared this love of reading with her children, making sure they had a book in their hands, even while watching television. In addition to reading, she had a strong passion for bridge. She played in several bridge clubs in Mobridge. She was often teased by her kids that after she retired, everything she did was scheduled around the many bridge engagements she kept. In 2016, she moved to Bismarck, where she lived with her daughter, Anne and family.  She became a member of Corpus Christi Catholic Church.

Her greatest joy was becoming a grandma.  She became “G’ma Jan” to several kids who didn’t have grandparents. Kevin, Caitlin, and Shelby Moch began the list. It grew to include Ryan and Josh Auble; Mike, Don, and finally Kira Rose Eliason. She loved spending time with each of her grandchildren and loved watching them grow into wonderful young adults. She was so proud of her grandkids!

She was preceded in death by her beloved son, Joseph in 1981; her parents, former husband,Neal; a sister, Ellen Theresa; her brothers, Terence A.,John J., Emmett J. and William H. and sisters-in-law, Patricia and Lynn O’Keefe, Joan Hedderman and Mary Bick .

Memorials preferred to the A. H. Brown Public Library in Mobridge SD or NDSU Nursing at Sanford Health Bismarck.

To order memorial trees or send flowers to the family in memory of Jan Auble, please visit our flower store.