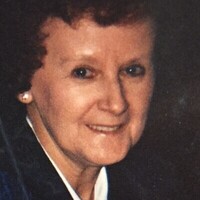 Funeral services will be held 11:30 a.m. Thursday, November 18 at Parkway Funeral Service, 2330 Tyler Pkwy, Bismarck.  Visitation will be held one hour prior.

Burial will be held at 2 p.m. Thursday at the North Dakota Veterans Cemetery, Mandan.

Mary was born on June 2, 1935 in Wilton. She was the last of eight children of Carl and Hazel (Bly) Gilbertson.  Mary grew up in Wilton and graduated from Wilton High School.

Mary was the true coal miner’s daughter.  Her father worked hard in the open coal mines of Wilton.  At times it was a hard scrabble life with tales of the entire family sleeping in one room around the coal stove during the cold North Dakota winter nights.

Although life during the Depression was tough during her youth, the family remained close-knit and loving, compassionate and charitable to others.  The family even adopted their neighbors’ two boys who were orphaned.  Mary’s family values from childhood continued through her entire life as she was compassionate and caring especially towards those considered the underdog.

Mary moved from Wilton to Bismarck and started her career as a bookkeeper at Provident Life.

She was good with numbers.

Mary later met Norman Fetch at a dance where they instantly clicked.  On February 24, 1965 Mary and Norm married in Selby, South Dakota.  They had two sons, Monty and Michael.  Mary worked as a supervisor with Norm for Service Master for 24 years.  Mary was well-liked by the employees she and Norm supervised.

Mary was a kind and gentle soul who enjoyed gardening.  Every spring she’d do her planting and by summer, there would be an abundance of flowers all over the yard.  She especially liked her peonies and hibiscus flowers.

The holidays were an important time for Mary.  She loved making huge family dinners with ham, turkey, mountains of mashed potatoes and rivers of gravy and there were many delectable desserts.  Even late in the evening, she’d say, “Would you like more to eat?”  Every year when her husband Norm went on his week-long fishing trip with his brothers, there would always be a request to send her pigs-in-a-blanket dish to keep the boys happy during their trip.

Because family was important she enjoyed making trips to Toledo, Ohio, and to Sacramento, California, to visit her sisters, Margie and Laverne.  Also, she took her entire family to spend Thanksgiving holidays at the Schatz family farm (Ella Nora) where many good memories were made.  She also enjoyed going to Las Vegas with Norm to play the slot machines and see the shows. And locally, for many years she enjoyed going out with family on their pontoon boat on the Missouri river.

Mary is survived by her two children, Monty (Julie) and Michael (Peggy); and her two grandsons, Jordan and Jairdan.

To order memorial trees or send flowers to the family in memory of Mary Fetch, please visit our flower store.