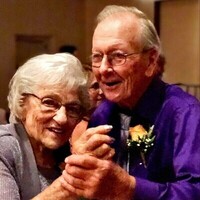 Mary was born on April 6th, 1930 on a farm near Gillett, Wisconsin. The fourth of nine children, Mary was raising kids and helping people get well from an early age-something that continued until the end. Her little sister Naomi didn’t see well as a child and remembers getting by by following in her big sister’s footsteps. When she thought her baby sister Anna was too skinny, Mary would save her milk money so she could buy treats to help her gain weight. Broken bones, chicken pox, upset stomach… she cared for everyone who needed her help. As Mary grew up she learned to cook, knit, and sew along with doing her regular farm chores. Somehow Mary also found the time along the way to learn how to play several musical instruments including the electric organ and the harmonica. She also lettered in band for twirling and participated in 4H. It was in 4H that she met her future husband, Virgil. Despite her father’s disapproval (apparently holding up the cloth roof of your car with a stick did not impress him), Virgil became her partner in adventures for the next 72 years.

Mary and Virgil were married June 30th, 1947. Their son, David, was born that December. Another son, Daniel, came along in December 1950. Cynthia arrived in August 1955. During that time their little family moved from Seneca to Stitzer so Virgil could run his brother’s cheese factory. While Cyndy was a baby Mary worked in a canning factory and had a short stint waiting tables in Phoebe’s Café. She also sold Stanley products… until Danny helpfully redecorated with the lipsticks. Their family felt unfinished, so they had another baby in 1963; Mark was born that November. 1963 brought another big change for the Johnson house; indoor plumbing. No more chance of Danny locking his ma in the outhouse. The family was complete with the arrival of John in July 1967. In 1972 the family (minus David, as he was married) relocated to North Dakota to run their own cheese factories.

The worst thing you do was to tell Mary she couldn’t do something… it immediately became EXACTLY what she wanted to do. You can’t make that! YES I can. Don’t buy that. Well now I HAVE to. She never met a recipe or knitting pattern she didn’t want to try- and mostly finish… or at least buy all the needed supplies. No matter what, she was always the backbone of the family. If she was needed she was there. If someone needed something she took care of it. Always competitive, later in life she and Virgil would compete to see who could plant the most hills of potatoes or grow the most tomatoes. Not content with just one kind, she would proudly tell you about all the different varieties of potatoes she had… if variety was the spice of life then Mary was determined to have several shelves’-worth. If it was new and different she had to try it.

Along with children, Mary and Virgil’s house was never short on animals. Over the years their home had a small zoo’s-worth of pets. Mostly cats and dogs but it wasn’t out of the question to see a raccoon or pig. Even the chickens were ‘her girls’; more than once you’d come in and see Mary sewing away with a chicken on her lap while the other hens roosted on the curtain rod above the door. Or come in to find her sitting and having breakfast with a pet robin… Mary would have oatmeal with dried blueberries while Herberd would have dried blueberries with mealworms. When the dog brought home a whole turkey egg in his mouth Mary quickly got out a towel and the electric frying pan and hatched out the baby turkey. Animals were always treated very well and often thought they were people too. Abandoned or lost cats and dogs could always find love with Mary. If she had to pick a favorite it would probably have been Henry, her small white poodle. Dressed up in his jaunty sailor’s collar with his nails painted, Henry went everywhere with Mary, Danny, and Lisa. He loved boating, eating pancakes, and ALWAYS needed his ice cream cone after going to the groomer’s. He could be just as spunky as Mary if he didn’t get his way. For the last several years her cats Frank and Sally have been by Mary’s side. Through sickness and health and flood, those two cats watched over her. Sally would head-butt her awake so Mary would put on her oxygen line. Like us, they will miss her terribly.

No write-up of Mary’s life would be complete without talking about her love of shopping; she loved a sale whether it was a department store or a rummage sale. She always thought about the people in her life and would find a little something for someone on every trip. Even if it seemed ridiculous to everyone else she knew just the right something for someone… and sometimes didn’t hide it away so good she couldn’t find it when they came over. We expect to find lots of treasures as we start sorting through everything. (I’m really sorry grandma, but we’re going to have to touch your stuff.)

Throughout her life Mary loved adventure. Camping, boating, fishing, hunting, even a shopping trip could be an adventure with the right attitude. She could out-fish her husband and stay out elk or moose hunting with the best of them. All Mary needed for an adventure was a cooler with some cheese and summer sausage, and a phone book for the maps. She and Danny (and often Lisa) would hop in the car and “go ‘splorin’” for the day. Or maybe a week. Or she would hop in the semi and get a ride out to Wisconsin to visit her family. While that might be all Mary NEEDED she was never caught under-supplied; you just never know when you might need that electric frying pan (what if there’s a bird to hatch or you want bacon while camping?) or that pair of cute shoes (maybe we’ll find somewhere fancy to go!). Hey, and don’t throw that box away, that’s a good box! Although she didn’t really like flying the promise of adventure was too strong- once she made it through the agony of packing and then takeoff, she was always excited to go. She went to Canada and Italy/Monaco with Virgil, to Mexico with her sisters and Cyndy, and all over the US with others in her family. After her granddaughter Lisa moved to the UK Mary, Cyndy, and Sarah flew over twice. She got to see Stonehenge, Loch Ness, and even a side trip to Venice. But even a trip to the thrift store was a good adventure; as she said, “You always have to look over the next hill because you never know what you might find.”

Even with all her adventuring, Mary’s family knew that they could always bring home a friend (or 4) and they would be welcomed as family. The Johnson house always had space for strays of every sort, be they human OR animal. She was always prepared for everything- maybe even nine of everything. Which was good because eventually Mary and Virgil had nine grandchildren… and later nine great-grandchildren. Once during a particularly crowded Easter she looked at her husband and said “And YOU said this house was too big! Look what you started!!”

She was preceded in death by her husband, Virgil; her parents, Art and Elsa; her brothers, Walter, Lyman, Lawrence, Carl, and Hans; her son, David and her grandson, Nicholas.

So… okay fine, toodle-oo. We love and miss you, but we’ll talk again someday.

To order memorial trees or send flowers to the family in memory of Mary Johnson, please visit our flower store.