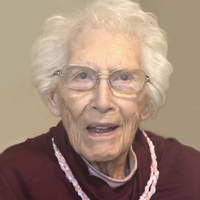 Mass of Christian Burial will be held at 2 p.m. on Friday, July 8, at St. Katherine’s Catholic Church in Braddock.

Mary Ellen was born July 16, 1926, in Millerville, MN, to Thomas and Eleanora (Kuhn) Marx. She graduated from Braddock High in 1944 and St. Alexius School of Nursing in Bismarck in 1947. On November 29, 1947, she married Lawrence L. “Pete” Naaden. They began farming and ranching south of Braddock, then Gackle, and ultimately operated the Naaden Ranch at Braddock.

Mary Ellen used her nursing skills for decades triaging friends, neighbors, family, and strangers. That didn’t slow her cooking, cleaning, running meals out to the field, helping her mother next door, chasing down farm equipment parts, and corralling a dozen children. She was fearless – except when it came to spiders.

Mary Ellen was known for her welcoming spirit and strong Catholic faith. She relished reading, fishing, gardening, sewing, knitting mittens, and hunting for sales. She didn’t just bake bread, she ground her own flour. Food from her kitchen – and it was a lot – was delicious. Her family loved not only her cooking but also her sharp memory and storytelling. With her musical laugh, she delighted in telling of an accidental trip through a car wash with the windows down and her mother shrieking beside her.

For many years, she was active in Farm Bureau, St. Katherine’s Altar Society, Lamplighters Homemaker’s Club, and politics. She was an accomplished writer with a keen sense of humor. In 1963 she wrote a series of pithy odes on a proposal to remove federal controls on farmers’ wheat acreage. The odes, published locally and then nationally, brought the issue to farmers across the nation and the referendum passed.

Mary Ellen was Pete’s lifelong partner and editor-in-chief. During his 28-year tenure in the ND Senate, she managed the home front and in later years joined him in Bismarck during legislative sessions. She had a rare ability to roll with the punches, like the time Pete invited all Republicans from the county to a picnic at their house. Mary Ellen found out about it, just as everyone did, by reading the invitation in the Emmons County Record. She had a week to prepare and no inkling of a head count since the invitation lacked an RSVP. True to her style she dug in, and she and Pete (with the help of a daughter squad) pulled it off with aplomb.

With her busy life and many responsibilities, we don’t know when Mary Ellen had time to sleep. May she enjoy her eternal rest in heaven.

To order memorial trees or send flowers to the family in memory of Mary Ellen Naaden, please visit our flower store.