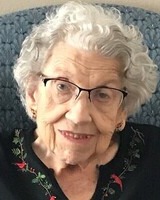 To watch the service via live stream, visit the church website at https://churchofthecross.org/

Mary Tryznka, 95, formerly of New England, passed away on July 3, 2021 in Bismarck, ND with her daughters, Mary Ellen Hassett and Maggie Anderson and son-in-law, Dave by her side. Funeral service will be on Tuesday, July 6th, 10:00 am CST at Lutheran Church of the Cross, 1004 E Highland Acres, Bismarck. Visitation will be one hour prior to the service. Burial will take place on Tuesday at the Dickinson Cemetery at 1:00 pm Mountain Time.
Mary Margaret Trzynka was born on April 19, 1926 in Louisville, KY to Argus Ray and Victoria Ruth (Deckard) Carwile.  She died July 3, 2021 peacefully at home in Bismarck with her family next to her.  She graduated from Louisville Girls High School in 1943 and during WWII worked as a file clerk at a US Medical Depot.  Following the war she attended the University of Louisville, Kent School of Social Work and graduated from Carver School of Missions and Social Work.  Mary decided to become a social worker after attending a Billy Graham crusade.  While attending school, she worked at various positions and after finishing school she worked in the Jefferson County Welfare Department in Louisville.  Mary started the library at the Beechmont Methodist Church in Louisville.

In 1963 she moved to Anchorage, Alaska where she worked as a social worker for the State of Alaska in the Social Welfare Department.  On February 14, 1964, she married Dale Paul Trzynka and they lived in Anchorage until his retirement from the Air Force in 1966.  They moved to New England, ND in 1966 where she lived for 31 years until she moved to Bismarck in 1997.

While in New England she served on the Hettinger County Social Services Board for 10 years.  In the 1970’s she helped organize and volunteered with the Campfire Girls.  After moving to Bismarck, she volunteered as a reader for the Dakota Radio Information Service and volunteer reader for an individual who was blind.  In the recent years she belonged to knitting and quilting groups at Church of the Cross and was responsible for cutting stamps for Sons of Norway.  She knitted prayer shawls as well as hundreds of baby caps and chemo caps for local hospitals.  She also enjoyed traveling, good movies, visiting with friends, staying up to date on current events and reading. When she was unable to read regular books, she continued to enjoy books through the Talking Books Program.

Mary lived independently until Christmas Eve 2018, when she joined her daughter Maggie and son-in-law Dave in their home.  She enjoyed two and a half years with Dave and Maggie and remained active and healthy until a stroke late on June 29, 2021.

She is survived by immediate family - her sister, Joann (Jim) Montgomery of Cincinnati, OH, daughters Mary Ellen (Keith) Hassett of Bear, DE, and Maggie (Dave) Anderson of Bismarck.  She is also survived by a number of brothers and sisters-in-laws, nieces and nephews.  She was preceded in death by her husband, Dale, her parents, brothers Jacob Tidings Carwile, Kenneth Ray Carwile, and her sister Lou Ellen Williams.

Mary would want you to thank a family caregiver for all they do to support and care for family members.

In lieu of flowers, please send donations to:

To order memorial trees or send flowers to the family in memory of Mary M. Trzynka, please visit our flower store.