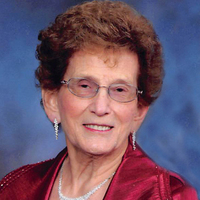 Mary Vetter, 88, Bismarck, passed away on Dec. 16, 2020 at St. Vincent’s Care Center, Bismarck. Mass of Christian burial will be held at 12 p.m. Saturday, Dec. 19 at Church of St. Anne, 1321 Braman Ave, Bismarck. A service livestream of the funeral mass and vigil/prayer service will be available for everyone to join on the funeral home’s website, listed below.

Visitation will be held from 5 to 7 p.m. Friday at Parkway Funeral Service, 2330 Tyler Pkwy, Bismarck. A vigil/prayer service will begin at 7 p.m.

Mary was born on Jan. 25, 1932 in rural Logan County near Napoleon to Frances (Schwartzenberger) and George A. Gross. She was the second oldest of 11 children. On May 30, 1950, she married John Vetter at St. Anthony Catholic Church, rural Napoleon. Together, the couple farmed with John’s parents for eight years. In 1958, they purchased a rural farm in Linton and operated a dairy and small grain farm. They were married for 69 years and together had 15 children.

She was a member to a group of local singers called the Young German Singers who performed at different events and recorded an album. Other than being a housewife, Mary drove head start children to school for 14 years. She was a member of Christian Mothers and served on the ARC Committee and Altar Society. Mary was a member of St. Anne’s Catholic Church in Bismarck for 34 years.

In 1986, John and Mary moved to Bismarck. She provided childcare from her home for 10 years until her retirement. Mary did volunteer work at the Senior Center and helped John haul Meals on Wheels for the elderly. On Valentine’s Day in 1997, to their surprise, the couple was chosen as King and Queen at the Senior Center.

Mary enjoyed singing, dancing, playing bingo, going to garage sales and looked forward to the annual Fourth of July Vetterville reunion. She also looked forward to gathering with her siblings for Halloween parties; gathering with her brother, Msgr. Valentine, at his cabin in Detroit Lakes; and going on trail rides with her children and grandchildren on Terry and Terrysa’s Farm on the homestead. She had a special love and bond for babies. Nobody ever left the Vetter home hungry. Mary’s giving personality came out especially in her love in cooking for not just her family, but anyone who may have visited.

In 2015, John and Mary moved to Touchmark and in 2019 resided at St. Vincent’s until Mary’s passing.

A special thank you to St. Vincent’s for the special care provided to Mary.

To share memories of Mary and to view the service livestream, go to www.parkwayfuneral.com.

To order memorial trees or send flowers to the family in memory of Mary Vetter, please visit our flower store.