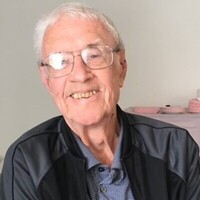 Melvin (Mick) Miller passed away October 17, 2021 after battling complications from a stroke.

Mick was born February 8, 1933, in Burns, MT to Godtfred and Bertha (Schmidt) Miller. He was raised on the family farm in Savage, MT. Mick was a member of the graduating class of 1951 from Savage High School. He left Savage to attend Western Montana College in Dillon, MT on a basketball scholarship where he met his future wife Joyce Hariu. They married October 11, 1952 and returned to Savage.

He was drafted into the US Army in April 1953 where he honorably served as a military police officer in Des Moines, IA before being deployed to Korea. When he was discharged in April of 1955 they returned to Savage & farmed until 1967 when they moved off the farm and into town. He drove truck for a few years before becoming the Foreman-clerk at Knife River Coal Mining Company’s Savage Mine on October 1, 1968. Before his retirement on April 17, 1993, he had moved up to the position of mine superintendent. Long into his retirement he enjoyed part-time farming for the Bastas and the Iversens. He finally fully retired and in September 2014 he and Joyce moved to Bismarck, ND to be closer to their daughters when his health started to fail.

Mick loved his family and spending time with his kids, grandkids and great grandkids. He enjoyed bowling in the fall and winter and spending the summers at their cabin on the Van Hook Arm of Lake Sakakawea. He and Joyce spent their days at the lake boating and fishing and playing bingo.

He was preceded in death by his parents, Godtfred and Bertha; his brothers, Ervin, Lester and Perry Miller; his sister, Bernice Dawe and great-grandson, Beckett Hilzendeger.

To order memorial trees or send flowers to the family in memory of Melvin Miller, please visit our flower store.