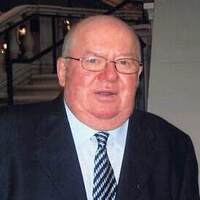 Burial will be held at the Dawson Cemetery.

Melvin Jacob Schauer was born July 24, 1927, one of 12 children, to Emanuel and Caroline (Ketterling) Schauer in Bunker Township, 15 miles south of Dawson, Kidder County. He was baptized and confirmed in the Lutheran faith at Glukestal Church.

He attended county schools in Belden 1 and 3. He began employment with Dawson Railroad Coal Dock in 1946. In 1949 he was employed by Zontelli Construction as a lineman building REA lines.

Melvin was inducted in the US Marine Corp in November 1951 and was honorably discharged in November 1953. In 1955 he was again employed by Zontelli Construction as a line foreman installing RTA telephone lines. In 1956 he began a 30-year career with  MDU as a serviceman in the Steele and Elgin districts. In 1972 he was transferred to Ipswich, SD, as a district representative. While employed by MDU he was active in the communities by serving on the Lutheran Church Council, Church Choir, American Legion and fire departments. He retired from MDU in 1987 with over 30 years’ service.

Melvin and Elma Ketterling (Scheuneman) were united in marriage at the Dawson Lutheran Church on Nov. 16, 1969. Elma passed away in 1991. Mel and Joyce (Jarske) Reiland were married July 1, 1995, at St. Boniface Catholic Church in Logan County. Following their marriage he was blessed with step-children, step-grandchildren, and step-great-grandchildren. A role he lovingly fulfilled. They made their home in Bismarck and enjoyed cabin life at Lake Isabel and Green Lake. In 2011 they moved to the assisted living apartments in Wishek. He entered the Wishek Living Center in August, 2022.

Proud to serve his country in the US Marines, he continued his dedication through life long membership in the American Legion and Honor Guard. Patient and non-judgmental, Mel drew people in with his quiet demeaner and concern for them. Slow to anger and rich in kindness, he was never without a tape measure and the small pocket knife he received from his Godparents on his sixth birthday.

We wish to express our heartfelt appreciation for the love and support shown to us as we say goodbye to a wonderful man.

To order memorial trees or send flowers to the family in memory of Melvin J. Schauer, please visit our flower store.