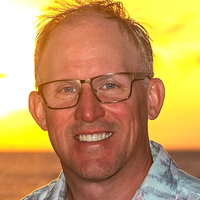 Visitation will be held from 5:30 to 7:30 p.m. Wednesday at Gracepoint Church, Bismarck. A sharing of memories will begin at 6:30 p.m.

Mike was born on August 9, 1967, to Larry and Virginia Emmel in Kenmare, North Dakota. He grew up on the Emmel Family Farm north of Kenmare, until moving to Bismarck for college in 1985.

After moving to Bismarck, Mike met the love of his life, Camey, in the fall of 1985. They were wed on June 16, 1990, in Bismarck. Mike and Camey made their home in Bismarck where they started their family of five children: Cole, Paige, Blake, Brooke, and Isaac.

Mike worked on the family farm through college until embarking on his passion of woodworking, which he picked up working in a small workshop at the family farm. He worked at Klemetson Woodworks for a few years before starting his own business, Interior Woodworks, in 1994. Mike had great joy in bringing his creative thinking to each job he had the opportunity to be a part of and was grateful for all the friendships created along the way.

Mike was an admirable professional and displayed his servant heart at all times. Whether it be in his business, his volunteer time at church and the greater Bismarck community, as board President of Shiloh Christian School, or in his countless friendships - Mike always looked for opportunities to share the gospel, serve others, and improve the lives of those around him.

Most importantly, Mike enjoyed spending time with his family. He very rarely missed out on his children's sporting events from kindergarten all the way to college. Over the last few years, Mike loved to get together as a family at the lake cabin during the summer. It was being surrounded by family that Mike enjoyed most.

To order memorial trees or send flowers to the family in memory of Michael Darrel Emmel, please visit our flower store.