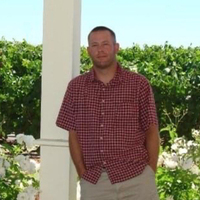 On August 17, 1974 Michael Steffes’ parents Dan and Lila along with his older sister Kris, welcomed him into the world. On May 19, 2022, Michael bid goodbye to all those who loved him and to those he loved in his tender, gentle way.

From the beginning, Michael was a tow-headed spit fire. True to form, he was baptized at the Kirkwood Mall theater, which in the ‘70s temporarily served as the Ascension Catholic Church.

He was hell on wheels when riding his bike and setting up a hockey “rink” on the driveway of his home where he and his friends played with wild abandon.

Michael was a talented hockey player. His hockey career began when he was five years old, and he continued to play even beyond high school. He was forever proud to be a Demon on the BHS hockey team and shared his love of hockey with the kids he coached.

Although his love of hockey ran deep, it could not eclipse his devotion, dedication and frustration with the Minnesota Vikings or the game of golf. Michael’s best days where watching the Vikings win or being on the course driving a golf cart with a cigar clamped between his teeth.

Michael was a gentle, loving soul to family, friends, and the many animals he doted on throughout his life. Those lucky enough to know him know he had a silver tongue and could debate or hold conversation on many topics for hours. He was truly a man who never met a stranger and this talent served him well in his career in sales.

As easy going as Michael was, he was also competitive. Anyone innocently sitting down to play him at one of the many board games he loved would find that out quickly. He was also a pinball wizard of sorts, constantly on the lookout for what he considered “the best” pinball machines and would send taunting pictures of his high scores to friends far and wide, challenging them to try to beat them.

Michael was a curious guy. He liked to read any place where he’d be sitting for long periods of time. He took up playing guitar and enjoyed writing lyrics and melodies which he played only for the chosen few.

Michael was preceded to heaven by his grandparents, Virginia and Howard Steffes and Pearl and Donald McDowall; by his uncles, Gary McDowall and David Steffes; and his aunt Sandra Brockbank.

Michael was loved by many and was generous and fierce in loving them back. Those lucky to have known him cherish the love and joy he gave so freely and thoughtfully. Those left behind and missing him are his parents, Dan and Lila Steffes; his sister and brother-in-law, Kris and Steve Snow and many loving aunts, uncles, and cousins.

To order memorial trees or send flowers to the family in memory of Michael Steffes, please visit our flower store.