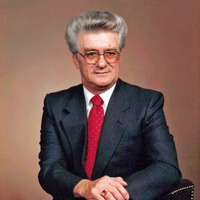 Visitation will be held from 5 to 7 p.m. Monday at Eastgate Funeral Service, 2302 E Divide Ave., Bismarck.

Burial will be held 1 p.m. Tuesday at the North Dakota Veterans Cemetery, Mandan.

Mike was born on March 22, 1932 at his parent’s home at the farm in Strasburg to Ray and Catherine (Dosch) Wagner. He was raised on that farm and attended country school there.

After school, Mike worked for local farmers in the surrounding area until he had enough money to move to Bismarck. It was in Bismarck that Mike met Tillie Geffre. The two married on November 11, 1952 at the St. Peter and Paul Catholic Church in Strasburg. They had two children, Michelle and Mark.

Mike joined the Army during the Korean War. He was deployed in Korea for two years. After returning home, Mike started searching for a career. He began working at the Postal Service in Bismarck.

He was a dedicated member of the Knights of Columbus, where he was awarded the Knight of the Year. Mike was a lifetime member of the AmVets, VFW, the Elks and the American Legion.

Mike enjoyed spending time with family and friends. He really enjoyed dancing with his friends on Saturday nights at the Eagles in Mandan, especially with his friend Jenni Masseth.

Mike is survived by his daughter, Michelle, and family: Michael (LeeAnn) Buckmiller, and their three children, Xzavier, Quinn and Ryker; Christopher (Maria), and their one child, Carly Rose); son, Mark (Susan) and their family, Megan (Ridgely Kraft) and their two children, Ainsley and Eisley; Marissa (Russel Jenkins) and children, Emersyen, Addelia and Jetison; sister, Shirley; and special friend, Jenni Masseth.

He was preceded in death by his wife, Tillie; his parents; two sisters, Rose and Angeline; three brothers, Al, LeRoy and Daniel; and his son-in-law, Randy.

To order memorial trees or send flowers to the family in memory of Michael Wagner, please visit our flower store.