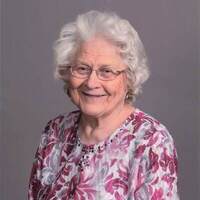 A livestream for Muriel's funeral services will be available at this link: https://www.youtube.com/watch?v=lPRoqLOfebY

Muriel Lorraine (Johnson) Seidel, 93, Bismarck, passed away peacefully on Oct. 17, 2021 at her son’s home, surrounded by her loving family.

She was born on February 17, 1928 in Perkins County, South Dakota, to Oscar and Hilma (Sandwick) Johnson, who homesteaded there in a sod home. Muriel was the sixth of eight children and took easily to the role of the family baker. She attended Burdick School, between the Johnson Dam and Rosebud, South Dakota. Her childhood was filled with music and dancing, as her father played the violin at home and at neighborhood dances. In 1947, she graduated from Lemmon High School and then attended Northern State Teachers College in Aberdeen, South Dakota. She went on to teach school for one year at Johnny Butte School.

Muriel met Raymond J. Seidel and they married on June 17, 1948 at American Lutheran Church in Lemmon, South Dakota. They happily lived on and farmed the family homestead near Meadow, South Dakota until 1953. After the birth of their daughter, they moved to Bismarck, North Dakota. While there, Ray built Muriel their treasured family home on 23rd Street where they would live out the remainder of their days together. After moving in, they were blessed with three more children and began investing themselves in their new community and church. Their love for their children shined through in the way she and Ray participated in PTA committees and led the local Brownie and Cub Scout troops. Even though he passed away in December of 1985, Ray would forever be the love of Muriel’s life.

Muriel’s life leaves a vibrant legacy and she consistently dedicated her life to serving others.  She was beloved as “The Cake Lady,” having crafted delicious cakes for countless weddings, anniversaries and birthdays—sometimes for multiple generations within one family.  An avid volunteer, she was five-time president of the Lloyd Spetz American Legion Auxiliary Post #1 and also enjoyed chairing the North Dakota Girls State. Muriel held state office for the UCT and was active in the VFW Auxiliary. Proud of her Swedish heritage, Muriel supported the Three Crowns Swedish Association. In addition, she was a founding member of the M-50 Club, assisting Missouri Slope Lutheran Care Center in their mission to care for those nearing the end of life. At First Lutheran Church in Bismarck, she was financial secretary for over 30 years, a perennial member of the church choir and always on hand to volunteer.

While her friends and neighbors were always near and dear to her, Muriel’s pride and joy was her family. She was a generous hostess, forever cooking and baking to prepare for company. She knew everyone’s favorite cookie or pie and would do her best to have it on hand if she knew you were coming. Her house served as the center of her family life. If there was ever something happening in the kitchen, Muriel’s motto was always, “I should be helping.”