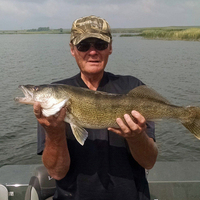 Myron Martin Colton, 70, Bismarck, passed away Nov. 10, 2021, after his courageous battle against cancer. A memorial service will be held at 1 p.m. Thursday, Nov. 18 at Eastgate Funeral Service, 2302 E Divide Ave., Bismarck. Visitation will be held one hour prior at the funeral

He grew up in Driscoll, where he graduated from high school. After high school Myron went to Dickinson State College for a year. He took a break from college when drafted into the Army, where he served for two years. After the Army, he went back to school at North Dakota State School of Science in Wahpeton where he graduated and became a civil engineer technician. He worked for Braun Intertec Corp for 30 years before he retired in July 2017.

When Myron wasn’t working, he spent all of his free time with his son, Colin. They enjoyed anything that involved hunting and fishing. They spent many hours looking for birds to sneak up on or a big buck to score. He also thought a day spent on the water was good for everyone’s soul. Some of Myron’s favorites included sneaking up on a flock of ducks, walking for pheasants with his dog, Fritz, or calling in that Big Tom turkey. Colin was Myron’s pride and joy…until Colin’s daughter Braya was born. She had definitely taken over first place in his heart.

Myron loved being grandpa to Braya. He enjoyed getting her to smile and squeak back to him.

He was preceded in death by his parents, Cliff and Jean Colton; sisters, Carol and Barbara Jean; and extended family and special friends.

To order memorial trees or send flowers to the family in memory of Myron Colton, please visit our flower store.