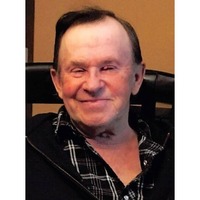 Myron Lee Falk, 68, passed away on Feb. 28, 2021, of natural causes at his home in Tappen.  Funeral services will be held 2 p.m. Friday, March 5 at the Eastgate Steele Memorial Chapel, Steele. Visitation will be held one-hour prior. A service livestream will be available on the funeral home’s website, listed below.

He was born on Nov. 12, 1952,  the son of Alfred and MaryLou (Kalmback) Falk.  He grew up on the family farm south of Tappen and graduated from Tappen High School in 1971.

Myron worked on the family farm, as well as for surrounding farmers.  In December 1979, he married Valerie Roder. Together they purchased a farm on the south edge of Tappen in the early 1980s.

As a young man Myron enjoyed lifting weights, riding horse, hanging around friends and fast cars and playing on the Tappen pool league.  Later in life, he enjoyed taking care of his cattle, watching the calves grow, and going to bull sales to find just the perfect one for his herd.  He had a heart attack and stroke in 2014. He continued to care for his cattle for approximately four more years. He had cattle for around 50 years.

He had a wonderful sense of humor and a very happy laugh.  He loved to talk to family and friends on the phone, watch comedy shows and boxing.  He had several dogs for companionship for many years.  He was also a believer in God.

Myron was preceded in death by his Mother, MaryLou; grandparents; and several aunts and uncles.

He will be sincerely missed, but his pain is now gone as he spends eternity in Heaven.

To order memorial trees or send flowers to the family in memory of Myron Falk, please visit our flower store.