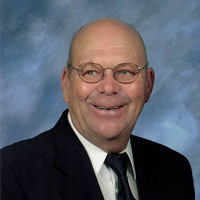 A memorial service will be held 10:30 a.m. Friday, March 18, at the United Church of Christ, 1200 E Highland Acres Rd., Bismarck, with a burial at the North Dakota Veterans Cemetery, Mandan.

Visitation will take place from 5 to 7 p.m. Thursday, March 17, with a prayer service beginning at 7 p.m. at Parkway Funeral Service, 2330 Tyler Pkwy, Bismarck.

A service livestream will be made available through the funeral home website right here from the online obituary.

Myron, also known as “Rosie” to many of his friends, was born on June 7, 1936, to Hilmer and Grace Rosene. He graduated from Jamestown High School in 1954. After high school, he earned a Journeyman plumbing license in 1955, the youngest in the state at 19, and at 24 he earned his Master plumber’s license in 1960 also being the youngest in the state. Myron was mechanical foreman for Cofell P & H for 22 years. Some of his most notable projects include the Bismarck Civic Center and Ice Rink, Schaumberg Ice Arena, multiple elementary schools, and many other local projects. He was also instrumental in the heating installation in four nose docks B52 Hangers at the Minot Air Force Base. During the lean years, the Plumbers & Pipefitters Union Local 300 provided industrial and powerplant opportunities in the neighboring states as well as WY, WI, and NE.

Myron was previously married and had one child, Lisa. Then Myron married the love of his life, Joyce Corell, in 1964. Together they had two children, Wade and Mona.

Some of Myron’s favorite activities included golf, camping, coffee at the round table, and Sudoku puzzles. He enjoyed wood-working and creating wood art for his family and friends. In addition, Myron donated his time volunteering with the Boy Scouts, Lions Club, United Church of Christ, Good Sam’s Camping Club, and Weston Village HOA.

He was preceded in death by his parents and sister, Becky.

To order memorial trees or send flowers to the family in memory of Myron G. Rosene, please visit our flower store.