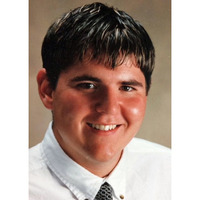 Nathan Scherr, 39, Fargo, passed into the loving arms of Our Savior on July 24, 2021, at the Bethany on 42nd Retirement Center, Fargo, after a long battle with multiple sclerosis. Funeral services will be held 11 a.m. Friday, July 30 at Our Savior’s Lutheran Church, Bismarck.

Visitation will be held from 5 to 7 p.m. Thursday at Parkway Funeral Service, Bismarck. A prayer service will begin at 7 p.m.

Burial will be held  2 p.m. Friday at Glencoe Cemetery.

Nathan Daniel Scherr was born March 21, 1982, in Bismarck. He attended Bismarck schools and graduated from Bismarck High School in 2001. He attended Minnesota State University Moorhead and received an associate of arts degree in business. Nathan had a strong interest in farming, as he spent much of his youth at his grandparents’ farm west of Hazelton. He also loved riding horses and would go on trail rides.

Nathan had a devout faith in God, and if you needed someone to pray for you, he’d be glad to do it. He taught us all how to be grateful for what we have, Nathan always had a smile and always told us he was awesome no matter what kind of a day he had.

He was preceded in death by two uncles, Durant Schiermeister and Clay Foell; grandparents, Peg and Andy Scherr; great-grandparents; and many great-aunts and great-uncles.

To order memorial trees or send flowers to the family in memory of Nathan Scherr, please visit our flower store.