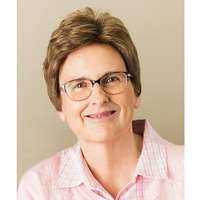 Visitation will be held from 5 to 7 p.m. Sunday at Parkway Funeral Service, 2330 Tyler Pkwy, Bismarck.

She was born in Rice Lake, Wisconsin, on June 7, 1957, to Jack and Jackie Bartlett. Pam was raised in Grand Forks and a family move brought them to Bismarck, where she graduated from Bismarck High. Pam attended Bismarck Jr. College and attained a degree in commercial art. Just before graduating college, she met the love of her life, Thomas Lannoye. They were married October 14, 1978, in Bismarck, at First Presbyterian Church. In 1983, they had their ﬁrst child, Samuel. Just a short 20 months later, twins, Michael and Stephen, were born. She loved being a boy mom. Pam was the twin’s ﬁrst soccer coach and was their biggest cheerleader throughout out high school. She enjoyed watching Sam run in cross country. She attended everything she could that involved her boys. She was also a loving a dog mom who, over the years, had three poodles.

Pam started her work career at Finley Engineering, but after about two years, she accepted a job as a cartographer at the Department of Transportation for the State of North Dakota. She ended her career after 38 years of service and retired in April 2017.

When Pam was young, she enjoyed camping, riding motorcycle and snowmobiling. She carried that love of the outdoors throughout her life. Camping became the thing she loved to do the most. Camping trips were typically planned with the whole family in mind. You could always ﬁnd her around a campﬁre cherishing every minute she had with her family. When she was stuck indoors during the North Dakota winters, you could ﬁnd her binge watching HGTV, various Netﬂix series, UND hockey and Disney movies with her grandkids and granddog.

She was preceded in death by her son, Samuel Lannoye; her parents, John “Jack” and Jacquelyn Bartlett; in-laws, Merlind “Bud” and Betty Lannoye; and nephew, Jon Treviranus.

To order memorial trees or send flowers to the family in memory of Pamela Lannoye, please visit our flower store.