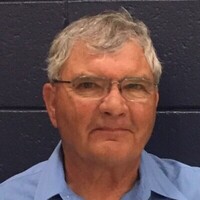 Visitation will be held from 5 to 7 p.m., with a prayer service beginning at 7 p.m., Friday at Eastgate Funeral Service, 2302 E. Divide Ave., Bismarck.

While on the family farm, the day had come where Pat and his dad drove to Bismarck, where Pat voluntarily enlisted in the United States Navy. He was proud to serve his country from 1969-1970 in the Vietnam War.  Upon his return from service, he attended college in Wahpeton at NDSSS (now NDSCS).

On October 4, 1974, Pat married his love, Kathy Ruscheinsky. They made their home in Carson.

Preston Patrick was born August 26, 1976.  On Preston’s first birthday, Pat moved his family to Wahpeton where he began his career as a Diesel Technology Instructor at NDSCS.

He had said time and time again, two of the things he was most proud of was his service to our country and the impact he was able to have on his students.

Pat and his family made Wahpeton their home until his retirement at the age of 62. It was then that Pat and Kathy moved back to Carson.

Anyone who knew Pat, knew that in the summers, you would find him on his boat fishing Lake Oahe in Mobridge, SD. In the fall, he’d have his shotgun ready for when his kids came home and asked him to go find some pheasants.  That man could out walk anyone of any age through the sloughs, tree rows and thick brush. Not to let the cold get to him, his love of fishing continued on the frozen waters, most often with his brother Danny or Preston and Tracy. He could even convince his son-in-law, Travis, to come with when he promised some Busch Lite and Peppermint Schnapps.

Pat was blessed with three grandchildren, Jazzy, Aiden and Myah. The brightest sparkle in his eyes were because of those three.  He was their strongest hug and their loudest cheerleader when watching them play sports.

Pat leaves behind a woman that he always believed was stronger than himself, his wife, Kathy.  She showed him nothing but pure love during the hardest of days. He also leaves his son and daughter-in-law, Preston and Tracy; his daughter, LeAnne and her husband, Travis. Hardest to leave were his grandchildren: Jasmine, Aiden and Myah.

He is survived by his brothers, Mike (Grace) Hauge and Charlie Hauge; sisters, Elsie Emch, Carol (Marvin) Ritz, Melodie (Casper) Hartman and Melanie (Owen) Wells; brothers and sisters-in-law, whom he felt were his own; numerous nieces and nephews and so many that called him friend.

We cannot forget about the paw prints left on his heart: Sam, Mae and Cash will miss being greeted at the door by Papa.

Those that preceded him in death include his parents, Arnold and Hilda; father-in law and mother-in law, Max and Phil Ruscheinsky; his brother, Danny; sisters, Ginny Larson and Linda Harper; and niece, Kari Jo.

Pat was not scared in the end. He knew it was his turn. He was just sorry that he had to leave us. If love could heal, Pat would have lived forever.

To order memorial trees or send flowers to the family in memory of Pat A. Hauge, please visit our flower store.