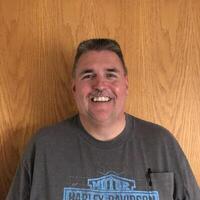 Phil S. Miller passed away at the age of 55 in Bismarck, ND on July 4, 2022, after a courageous five-year battle with cancer, surrounded by his family.

Phil was born on February 23, 1967, in Minot, ND.  His parents are Leslie Montag and the late Dwight Miller.  Phil has one sibling, Jennifer (Peter) Miller and one nephew Thomas Miller all of Janesville WI.  He was joined in marriage to Donna (Williams) Miller on October 1, 1991.  Phil and Donna would have celebrated 31 years of marriage and 32 years of togetherness this fall.  They have one wonderful, beautiful child, Hannah MacKenzie, who is 17 years old and furry kids Tundra the dog and Salem the cat.

Phil graduated from Bottineau High School in 1987 and went on to college at North Dakota State College of Science in Wahpeton and then to Lake Region State College in Devils Lake, ND, where he studied to be a police officer and graduated at the top of his class as valedictorian.  He worked for the sheriff's department in Bowbells, ND, and from there he worked at the police department in Mandan, ND, with a total of 10 years of service.  He also worked in management at a local computer company and was a computer technician as well.  From there he began his career at BNSF Railway in 2003 and was employed there as a train engineer/local chairman for the United Transportation Union at the time of his death.

Phil enjoyed his time working for BNSF as well as being a local chairman for the UTU.  He always fought for the rights of the employees and members he represented to the best of his abilities.  In his spare time he enjoyed tinkering in his garage, riding his Harley with his daughter, Hannah, sitting outside visiting with the neighbors, working on projects and helping any friends who needed help with a project or whatever else anyone needed.  Often times his friends didn’t even need to ask for help, Phil would just show up with tools in hand.  Phil was a wonderful husband, father, son, brother and best friend to many and just an all-around great guy.  He will be dearly missed by his family and everyone who truly knew him and loved him.

Phil was preceded in death by his dad, Dwight Miller; grandparents, Melvin and Juanita Vanderhoef and Frank and Marion Miller; and Uncles, Alden and Duane Miller.

In lieu of flowers, please donate in Phil’s name to Bismarck Cancer Center.

To order memorial trees or send flowers to the family in memory of Phillip Miller, please visit our flower store.