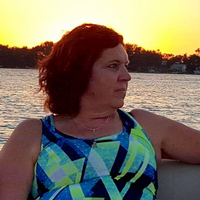 Phoebe DeKrey received her angel wings with family by her side on February 12, 2021. It was a difficult journey that lasted 280 days, but she was surrounded by her family and friends that made the road smoother along the way. Phoebe battled courageously but passed away peacefully at Sanford hospital. We take comfort in knowing Phoebe’s physical afflictions have been taken away. “But those who wait on the Lord shall renew their strength: They shall mount up with wings like eagles. They shall run and not be wary. They shall walk and not faint.” -Isaiah 40:31

Phoebe was born to Lawrence and Jerda Blumhagen on Jan. 7, 1961. She graduated in 1979 from Steele High School. Phoebe married her husband Tom DeKrey and after living in Valley City while Tom attended college, they returned to the family farm and resided in Steele for many years.

Phoebe had a home daycare and ran a cake, cookie and candy business from her home. She would later go to work as a bank teller and processor for the Bank of Steele and later Northland financial and Gate City Bank in Bismarck. Phoebe and Tom relocated to Cando, North Dakota in 2004 where Phoebe was employed at First Community Credit as a loan processor and then became employed as an insurance policy processor for Family Mutual Insurance Company.

Phoebe and Tom moved to Bismarck in 2007 to present where Phoebe transferred to the Family Mutual Insurance Company branch office.

She celebrated life through her family and friends and loved holiday gatherings. You could always count on her to plan and make lists to ensure that everyone had a good time especially the 4th of July and Christmas which was never complete without her meticulously decorated cookies.

Phoebe also enjoyed scrapbooking and made many memories with her friends on weekend scrapbooking retreats. The scrapbooks she made will forever capture the special moments she shared with family.

Phoebe’s special place was Lake Isabel where she and Tom would spend countless hours taking pontoon rides together around the lake at sunset. Nothing in the world seemed to matter as long as they were together on their evening pontoon ride.

Phoebe will be forever missed.

To order memorial trees or send flowers to the family in memory of Phoebe DeKrey, please visit our flower store.