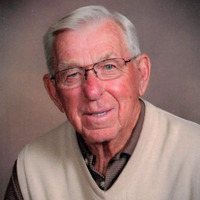 Ray Albrecht, 89, passed away on February 26, 2022, with his children at his side at Edgewood Village in Bismarck.

Funeral services will be held at 10:30 a.m., Friday, March 4 at Good Shepard Lutheran Church, 106 Osage Ave, Bismarck. A service livestream will be available on the church's Facebook page: https://www.facebook.com/goodshepherdbismarck/

Ray was born on October 28, 1932, at his homestead farm south of Dawson, to Jacob and Paulina Albrecht. In 1943, the family moved to a farm east of Steele, where he was raised with his twelve siblings. Ray graduated from Steele High School in 1951.

He married Fern Becker in November of 1954. Ray joined the United States Army shortly after marrying Fern and was stationed at Rhein-Main Airforce Base, Germany. After his time in the Army, Ray and Fern moved to Garrison where he owned and operated the Mobile Service Station with his brother. In 1960, they made their home in Bismarck where he worked for the United States Department of Agriculture as a Federal Animal Health Inspector for 32 years. They raised their three children, Dave, Tim, and Cammy in Bismarck. Ray was proud of his children, but he was extremely proud of his grandchildren and great-grandchildren. They were the love of his life.

Ray was a lifetime athlete, especially passionate about baseball and golf. He played semi-pro baseball and spent many years playing fast-pitch softball. Much of his time was spent refereeing football and basketball games, as well as umpiring endless softball and baseball games. Ray earned the honor of being inducted in the North Dakota Softball Hall of Fame and the North Dakota Officials Hall of Fame. Golf was a great passion for Ray as life moved forward. He spent countless hours with friends golfing in Bismarck and Lake Havasu, AZ. We thank his golf families both in Bismarck and Lake Havasu for being such a valuable part of his life. He was a lifetime member at Apple Creek Country club where his friends had a special place in his heart.

Ray and Fern spent over 30 years wintering in Lake Havasu, AZ. They thoroughly enjoyed their time with old friends and making new ones. They looked forward to their three months away from ND winters every year after their retirement.

He was preceded in death by his wife, Fern Albrecht; daughter-in-law, Connie Albrecht; his parents and eleven siblings.

The family would like to thank the staff at Edgewood Village and Caring Edge for their excellent care and wonderful friendships to our dad. He greatly appreciated and truly loved all of you.

In lieu of flowers, donations can be made to Good Shephard Lutheran Church or the North Dakota Veterans Cemetery.

To order memorial trees or send flowers to the family in memory of Ray Albrecht, please visit our flower store.