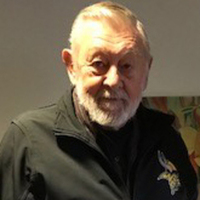 Raymond G. Volk, 74, Lincoln, passed away peacefully on November 14, 2021, at Sanford Medical Center Bismarck, with his family by his side.

Visitation will be held on Thursday evening from 5-7:00 p.m. with a rosary/vigil service starting at 7:00 p.m. at Parkway Funeral Service, 2330 Tyler Parkway, Bismarck.

In February of 1967, he joined the service and was in the Vietnam war. In the service he worked on the helicopters. After he got out of the service, he attended Bismarck Junior College for a year. He majored in Auto Mechanics and earned his degree. In January of 1974, he started at Melroe (Bobcat), working as a maintenance mechanic. He worked there until his retirement in 2008.

In June of 1972, he married Emma Roehrich, and to this union, three children were born: Diana, Loren and RaeAnn.

Ray was an avid hunter and especially enjoyed deer season. He looked forward to it every year, taking part in rifle and bow season. He enjoyed making sausage and sharing it with his friends and especially his children. He was always coming up with new recipes and trying new things while making sausage. He also loved the Minnesota Vikings. They were his team and he never missed a game. He even took in a few games and went to a game with his children and grandchildren.

He took pride in his yard, especially his "garden." Growing everything and anything. He always had enough to share with anyone and everyone. Most often resulting in those people bringing him salsa, cucumbers, and pies.

During the summer months you could always find him outside in the garden, visiting with the neighbors and mowing his lawn or watering the trees and flowers.

Ray was very proud of his children and his four grandchildren. His eyes would light up when talking about them. They were his world.

He was preceded in death by his parents and sister-in-law, Elsie Volk and many aunts and uncles.

To order memorial trees or send flowers to the family in memory of Raymond G. Volk, please visit our flower store.