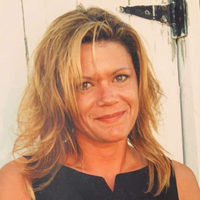 Renae Kay Barth passed away unexpectedly at her home on November 29, 2021.

Funeral services will be held at 1 p.m. Dec. 6, with visitation an hour before at Parkway Funeral Service, 2330 Tyler Parkway, Bismarck.

Visitation will be held from 5 to 7 p.m. Dec. 5, with a rosary starting at 7p.m. at Parkway Funeral Service.

She was born at St. Alexius Hospital on May 14,1971 to Norman J. Barth and Carol A. Wald. Renae was the baby girl of two older siblings Mike and Shannon. She grew up outside of Lincoln and loved to get into mischief with her cousins and sister. While in her early 20's she enjoyed "Traveling the World" with David Edwards while he was driving truck.

On March 1, 1994, she gave birth to her beautiful daughter, Mersadie. Renae was a single mom but with the help of some great friends and family; she raised one hell of a daughter. Renae’s house was always the house the kids would go to. Throughout the years she was a second mom to many of Sadie's friends.

Renae worked at St. Alexius for 17 years, starting as a janitor for many years. Eventually she worked her way up to the Surgical Center, where she was an anesthesia aide up until she passed away. She made many lifelong friends there.

Her greatest blessing in life was her granddaughter, Malia. Renae and her mom, Carol, loved to plan weekend outings and adventures with Malia. She could not get enough of her granddaughter.

Renae loved her animals.  They were her children.  She spoiled them more than she did Sadie. She loved taking Gizard the Gizmo (Roo Roo) for walks and to the river so he could run around.  Asparagus, (Gus) and Dieon/Colonel Sanders were her cats.  It was never a dull moment in her house.

She was proceeded in death by her father, Norman J Barth; Paige Barth (dog), and second "son" Luis A. Ortiz.

To order memorial trees or send flowers to the family in memory of Renae Barth, please visit our flower store.