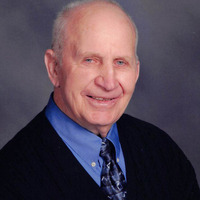 Reuben William Hins, 96, died on Dec. 10, 2020 at the Golden Manor, Steele. Funeral services will be held at 1 p.m. Wednesday, Dec. 16 at St. John’s Lutheran Church, Tappen. A service livestream will be available on the church’s website.

Reuben, the son of Gustave and Martha (Bitz), was born on a farm south of Medina on July 30, 1924. He received his education in Medina and worked the family farm until he was 19. From April 1944 until May 1946, Reuben was called to serve his country and was stationed in France and Germany during World War II.

On Feb. 23, 1949 he married Luella Kemmet. They lived between farms in Dawson and Medina until 1955 when they moved into Tappen and owned and operated the Tappen People’s Store. In 1965, he sold the store and went to work for Burlington Northern Railroad, advancing to the foreman position. Reuben retired in 1991. Reuben was a farmer at heart and continued to farm through the years. Reuben also loved horses and raised a few good quarter horses. Reuben loved playing pinochle with family, especially with his children and grandchildren. Nothing brought Reuben more joy than seeing and talking to little children. Reuben is a member of St. John’s Lutheran Church in Tappen.

He was preceded in death by his wife, Luella; his parents; two daughters, Melinda and Mae Hins; son, Corwin Hins; and grandson, Ross Hasse; brothers, Vernon, Valentine, Edalor and Curtis.

To order memorial trees or send flowers to the family in memory of Reuben Hins, please visit our flower store.