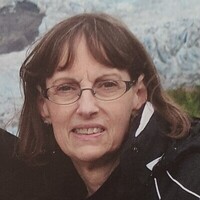 A service livestream will be available for viewing at the church's website, https://churchofthecross.org/stream-online/

In honor of Donna’s commitment to the welfare of others and the requirements of the venue, please wear a mask.

To accommodate all, the ceremony will be live streamed via the church’s webpage. A viewing will not be held.

Donna was born in Winona, MN, on March 24, 1951. Her father was a lumber salesman, and the family moved numerous times throughout her childhood before finally settling down in Bismarck.

Donna received an English education degree from Dickinson State college. She met and married the love of her life, Arthur Dohrmann, a farmer from Taylor, ND, in 1973 and the two settled in Taylor. Donna taught English and directed plays at the high school in Richardton, until she and Art had their two daughters, Jennifer and Wendi. After living on the farm for a decade, during which time she worked at B Dalton booksellers and was a manager at For Heaven’s Sake Christian bookstore in Dickinson, Donna heard the call to serve God as a minister. She first joined the Preaching Deacons program to gain some experience with ministry. Following this, Donna returned to school, achieving her Master of Divinity from Luther Northwestern Theological Seminary in 1994. She accepted her first call to Our Redeemer’s Lutheran in New England, ND, where she served until 2003. Donna’s second call was to Lutheran Church of the Cross in Bismarck, where she remained until her retirement in 2016. Pastor Donna, as she was known by most people she met, made amazing friends wherever she went and had a knack for touching people’s lives.

She was a talented seamstress and artist who worked with fiber, paints, and words to create objects of beauty and joy. She was an avid reader who enjoyed spending time taking walks, tending the flowers in her garden, singing, and playing games. Donna also had a kind heart, and she felt the greatest joy when she was helping others. She and Art traveled extensively, both before and after retirement. They traveled to Europe, South and Central America, as well as spending several winters as snowbirds who explored the United States via RV.

Donna passed from this world to the next surrounded by her family. She is survived by her husband Art; her daughters, Jennifer Dehnert (Brian) and Wendi Williams (Daven), as well as her grandchildren, Gavin Dehnert and Alaric Williams. She is also survived by her elder sister, Diane Schulman (Alan), younger sister, Maryann Goldstein (Brian); multiple cousins, brothers and sisters-in-law, 22 nieces and nephews, and countless great-nieces and nephews.

Donna was preceded in death by her parents Evelyn (Stahmann) and Donald Reimer; mother and father-in-law Edna and Richard Dohrmann, and brother-in-law Russell Dohrmann.

Donna was deeply beloved by her family and friends, and she will be sorely missed. In lieu of flowers, please consider donating to Heifer International, ELCA Good Gifts, or Lutheran Church of the Cross in Donna’s honor.

To order memorial trees or send flowers to the family in memory of Rev. Donna Dohrmann, please visit our flower store.