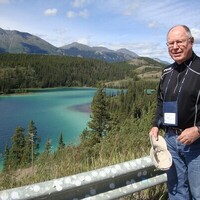 Richard “Rick” Winden, Bismarck, North Dakota, was called home to be with his Lord on July 1, 2022.

Rick was born on February 28,1940, in Alexander, ND, the youngest son of Hattie (Hansen) and Albert “Gilman” Winden. He was fortunate to have nine older siblings who doted on him from birth and taught him the ropes of small town living from roller skating at the Winden Hall to managing a swimming pool. At the age of 12, Rick’s family moved to Williston, ND, where sports and friends became his passions. He is a graduate of Williston High School (1958) and Minot State College (1962).

Rick’s life work was helping others, which would eventually guide his career in healthcare. He received his post-graduate degree in Physical Therapy from the Mayo Clinic in Rochester, Minnesota. He then found his calling helping athletes train and providing his expertise to anyone who sought care for their bodies.

Rick met Patricia (Overton), his soul mate, in Fargo, ND, at an employee hospital New Year's Eve party and then married on November 26, 1966. The early years of their marriage were one of adventure as Rick and Pat started private practices in California and Texas, as well as a hardware store in Montana with Rick’s brother, Lloyd. Rick and Pat eventually returned home to ND, to raise their family in the early ’80s.

Rick was inspiring, generous of spirit, and openly shared his knowledge, usually making people laugh along the way. Rick was driven by serving others and everyone he met became a friend.  He will be remembered by his faithfulness to the Lord, his wife and family, and his dedication to making people feel better about their physical health.

Rick enjoyed sharing stories about his family and photo’ing their travels. He was also a supporter of small-town jocks and could be found in the stands of local basketball and football games, encouraging their athletic greatness.  When he wasn’t working, Rick was camping, biking, hiking, or even kayaking with a baby in a backpack through Yosemite National Park. He enjoyed his time in Durango, CO, the mountains of Montana, and living in Bismarck, ND. Rick didn’t let a day pass without giving his wife a big hug, eating ice cream, popping popcorn, or all of the above.

He was preceded in death by his parents; and siblings, John, Helen, Roy, Harold, Edith and Ethel, Lloyd, and Arthur.

To order memorial trees or send flowers to the family in memory of Richard "Rick" Winden, please visit our flower store.