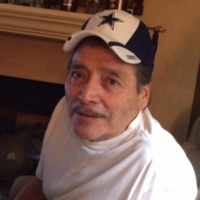 Richard was born on January 24, 1945 in Belcourt, ND to Joe and Agnes (Belgarde) Wilkie. He attended Wahpeton Indian boarding School from 1st to 8th grade. He graduated in 1965 from the Belcourt High School, where he played Football and Basketball, and was known as “Big Wilks.” Richard went to Fargo’s auto Tech school and opened Wilkie’s Garage with his brothers Oscar and Joe Wilkie in the late 1960s’.

Taking advantage of the Relocation Act, Richard moved southwest to Denver to begin his life career in sales of mobile homes. His business brought him to many places in the Colorado and New Mexico area. In 1980, he moved back to Bismarck, and opened Mobile Home Resale, in efforts to be closer to family. This was the year he met Judy Diede, and they married in 1985.

Being in the Mobile home business, Dick made many friends and acquaintances, selling families their first home, and then re-selling their mobile homes when they were ready to purchase houses. In 1992, Dick and Judy moved to St. George, Utah to enjoy their lives in warmer climates. They lived only 100 miles from Las Vegas, and would travel there for lunch frequently. In 1994, Dick decided that North Dakota was his home, so they moved back to Bismarck permanently.

Dick was an avid sports fan, and enjoyed watching his beloved Dallas Cowboys at various places while enjoying a burger, a beer and great company. Dick enjoyed talking and telling jokes. He loved telling stories from his past to his nieces and nephews. They also loved to travel, and went on many trips Southwest and north to Belcourt for holidays, especially for the Fourth of July. He enjoyed spending time with his Bismarck family Cole Strietzel (nephew/son), Shenna Parra (daughter/niece) and their kids Damian, Mckenzie, and Alaina at the shop; Cherie Sanchez (daughter/friend) at their home; Dr. Penny Wilkie Gullickson (niece) and Kenny Gullickson at the river or branding at the ranch. He had many fur buddies throughout the years, including Rex, Fred, Mai Tai, Makita, and currently the boys Mickey and Teddy.

“How about those Cowboys”

To order memorial trees or send flowers to the family in memory of Richard "Dick" Wilkie, please visit our flower store.