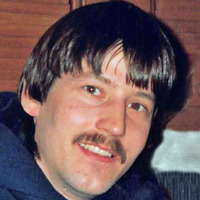 Robert Allen Edick completed his journey through life on March 9, 2021 at the age of 56. Funeral services will be held 1 p.m. Tuesday, March 16 at Parkway Funeral Service, 2330 Tyler Pkwy, Bismarck. Visitation will be held one-hour prior.

On January 13, 1965 a baby boy was born to Lavera Mae (Woodring) and Robert William Edick. Lavera Instilled in her son's life the value of work ethic. Bob was the youngest of his family with three sisters (Sharri Rubinow, Carolyn Haux and Beckie Coleman) and two brothers (Mike Massey and Jeff Miller).

At a very young age Bob was always doing any activity that kept him occupied. At age three, he was cooking and scrambling eggs on a griddle while still in diapers. It seemed like he was always outside, playing with his friends in the neighborhood where he grew up in the house on 1st street.

Bob was intuitive with mechanics, especially with motors. He had made his own go kart with his friend Wes Winkler. Bob was into motocross, which he thoroughly enjoyed. Bob would often go fishing and hunting. When he wasn’t busy with motocross, he enjoyed cooking, school and making small vehicles with tools he made. Bob was all about doing things himself, because he didn’t want to be “spoon fed.”

He graduated high school from Century High School in 1983. After high school, Bob started working in construction and ended leading his own crew in the summer. He went on to college at NDSU. Bob later on graduated with a bachelor’s of science in Psychology and a minor in business.

Bob owned a construction business called Edick Construction. Bob worked as a counselor/correctional officer at the Youth correctional facility in Mandan. He then switched careers to Edgewood as the project manager. Most of Bob’s time was spent on  working on his flooring business, FLOORCO. He took much pride in all of his projects, he was quite the craftsman/ Artist. Bob had a motto. In Bob words, “If it's worth doing, do it right!”

Bob wasn’t a shy guy at all and would often throw himself into long conversations with others, which befriended many. He would have many lifelong friendships. He would often put others before himself.

Bob met his loving wife, Tracee, through mutual friends. They fell in love and were married on January 12, 1996. Their first born was Bobby Edick. In October 1998 they had their second child, Mayla Edick. Bob spent most of his time with his family, the other majority of time he enjoyed his work and would love to go on deer hunts.

Bob is survived by a loving family. He leaves his wife, Tracee Edick; two children, Bobby and Mayla; and his five siblings, Sharri (Jay) Rubinow, Carolyn Haux, Mike (Sheryl) Massey, Beckie Coleman and Jeff Miller; and many nieces and nephews.

He was preceded in death by his parents, Robert W. Edick and Lavera Mae Edick.

Bob will live on within us, in our hearts and in our memories so future family and friends can also know him.

To order memorial trees or send flowers to the family in memory of Robert "Bob" Edick, please visit our flower store.