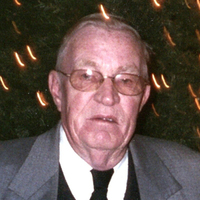 A funeral service will be held at 1:00p.m., Tuesday, October 18 at Parkway Funeral Service, 2330 Tyler Parkway, Bismarck. Visitation will be held one hour prior the service starts.

Burial will be at 3:00 p.m. at the North Dakota Veterans Cemetery.

Bob was born November 2, 1934, in Grand Forks to Albert E. and Myrtle (Erickson) Gausvik. He graduated from Grand Forks Central High School, attended Bismarck State College and UND. Bob served in the US Army from 1958-1960 and was stationed in California and Germany. After his honorable discharge, he went to work for the ND Highway Department inspecting road projects and later for the City of Bismarck in the engineering department for 15 years. In 1980, he became the Director of Public Works and held this position until his retirement in April of 1998.

Bob was introduced to DoLores Weber through a friend in Bismarck and on December 9, 1961, they married in Jamestown. They were blessed with two children, Douglas and Robyn. The family enjoyed camping, boating and fishing at Jamestown Smokey’s Landing, Lake Sakakawea and other states for over 40 years. Detroit Lakes, MN was also a special vacation home since 1983.

Bob had various hobbies, including playing guitar and his favorite was carving and painting wild ducks and other wildlife. He was a member of the Flickertail Woodcarvers.  He enjoyed coffee a couple of times a week with friends he had for over 50 years. He was a Past Master of Bismarck Masonic Lodge No. 5 and a member of the Scottish Rite and a lifetime member of the Elks Lodge 1199 in Bismarck, where Bob and DoLores kicked up their heels for one or two dances.  He was an avid hunter and fisherman and fished the ND Governor’s Cup and other tournaments with his son, Doug for over 18 years. Bob played hockey until the age of 48 in an Old Men’s League and enjoyed riding motorcycles and snowmobiles.   Bob and DoLores have been members of Trinity Lutheran since 1965.

Bob was preceded in death by his parents; sister, Gloria (Stan) Haas and brother, Donald Gausvik.

Memorials are preferred to donors choice.

To order memorial trees or send flowers to the family in memory of Robert Gausvik, please visit our flower store.