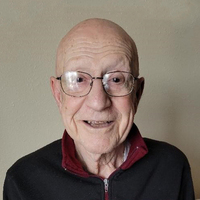 Visitation will be held from 3 to 5 p.m. Sunday at Eastgate Funeral Service, 2302 E Divide Ave., Bismarck.

Robert was born July 12, 1926, in Muscotah, Kansas, to Erwin S. and Orpha (Legler). His parents soon moved to Jamestown and then to Robinson and raised their family on a farm.  Bob was the oldest of three children in the family, having younger siblings, Vernon and Orla Bea.  In 1944 he graduated from high school.

Toward the end of World War II, Bob and his brother Vernon joined the Army. Bob served with the Army Quartermaster Corps, Administrative section, as Chief Clerk to the Quartermaster, Western Pacific Base Command, Saipan, Marian Solendo, Marianas Islands, and was honorably discharged in 1946 as a T/Sgt.

He returned to North Dakota and graduated from Jamestown College in 1951. After college, Bob was Assistant Accounting Supervisor with Northwestern Bell Telephone Co. in Minneapolis, Minnesota, and Omaha, Nebraska, for three years. He was Office Manager for T. Clem Casey of Bismarck for five years and traveled North Dakota as a State Bank Examiner for 10 years. For an additional 20 years he served as Assistant Commissioner of the Department of Banking and Financial Institutions of North Dakota, retiring in 1989.

On October 9, 1966, Bob married Calista Devore. They lived at 332 Nova Drive in Bismarck, where they were always growing new plants and keeping a very manicured yard. They also grew a variety of orchids and violets. Together they enjoyed traveling all over the United States and being active in the community and church.

Bob was a natural caregiver, taking care of Calista in their home and then continuing at Touchmark where they moved when Calista’s health was declining.  Calista passed away on November 11, 2003. Bob continued to live there for a time to take care of his brother Vern who passed away in 2008.  He then moved to the Mapleton apartments, but continued to be active at Touchmark, caring for the gardens and being an active volunteer in the community. In November 2019 Bob moved back to Touchmark where he resided until December 2021. He moved to Prospera on Sunset where he passed away.

Bob was a member of the American Legion, Bismarck Mandan Garden Club, Golden K Kiwanis and McCabe United Methodist Church. At McCabe, he served on many committees, served as the Director/Treasurer of the McCabe UM Church Foundation and was a member of the Chancel Choir for over 40 years and traveled to Europe in 2013 with the choir. He was also a long-time member of the Elks Choir. Bob continued to travel, including trips to Switzerland, Mexico and Hawaii with his nephew, Dave DeVore, and a mission trip to Haiti with the church at the age of 84.

He was preceded in death by his wife of 37 years, Calista; brother, Vernon; sister, Orla Bea Hitt; and nephew, Ted Hitt.

He is survived by his niece; Sue Burnett, Trenton, Ga.; nephews, Steve Hitt Springfield, Mo., Dave, Doug and Warren DeVore, all near Dawson, ND; cousins Lisa and Jeff Schmidt, Bismarck, ND and many great-nieces- and nephews.

Memorials may be given to the McCabe UM Church Foundation or a charity of the donor’s choice.

To order memorial trees or send flowers to the family in memory of Robert E. Keim, please visit our flower store.