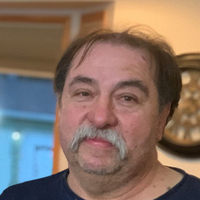 Robert “Bob” Christopher Williams left this world suddenly on May 18, 2022, at age 62, due to complications with his heart. Robert was a resident of Bismarck, North Dakota.

Robert was born in Riverside, California on March 10, 1960, to Anthoni R. Williams and Elvira F. Williams. He was a middle child with an older brother, Anthony Lee Williams, and a younger sister, Debra D Cerna.

Robert was married to Jovita R. Williams. They married on February 25th, 1995. One year later they had a child, Garrett James (Ashely Nicole) Williams born February 29th, 1996. Robert has two children from a previous marriage, Valerie, and Andrew.

He was a licensed contractor who was recently employed at House of Color and freelanced for Parkway Property Management. He was a very well-known floor installer, not just here in Bismarck but also where he called home in the Bay Area, California.

Robert had a big heart with a soft spot for the underdog. He was known for taking in people from all walks of life who just needed a little hope and a helping hand. He supplied work, meals, and shelter for those who needed it weather it was a young guy looking for work or his kids’ best friends, he always helped those in need.

Private Service for family only.

To order memorial trees or send flowers to the family in memory of Robert Williams, please visit our flower store.