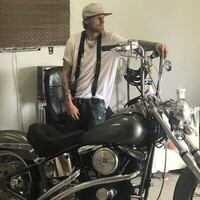 It is with great sadness that the family of Rollie Seidel announces his passing.  Rollie passed away Dec. 29, 2021, with his family by his side at Sanford Health, Bismarck from a massive stroke, likely caused by the after effects of COVID-19.

On Nov. 8, 1976, Rollie Russ Seidel entered the lives of Russell and Kathy Seidel in Mobridge, South Dakota, as their firstborn son.

Rollie was a free spirit with a kind heart.  He lived life on his own terms, taking the road less traveled.  Rollie had a great love for his family.  He was a big brother to Robbie.  They had a very close bond.  Where one was, the other was always not too far behind.

His early education started at Beadle Elementary School, Mobridge.  After that, the family moved to Hemet, California, and he attended middle and high school there.

He eventually learned and excelled in the flooring trade.  Rollie enjoyed sharing his knowledge of the trade with many others, including his brother, Robbie.  Their passion of flooring led to the start of their own business, Seidel Flooring, which was a great achievement for the two brothers.

Harley Davidson motorcycles, tattoos, music, camping and making people laugh were some of his favorite things.  Recently, he was learning to play guitar, a hobby he truly enjoyed.

Last year, he was blessed with a beautiful baby girl.  She brought out a side of him that was rarely seen by the outside world.  Ryien was his pride and joy.  His desire to make changes to be the best father to her was inspiring.

Family members he left behind include his daughter, Ryien (Jade), and the daughters and son he called his own, Keanna (Radek and Reign), Marri and Steele (Casey), all of Bismarck; his father, Russell, Deadwood, S.D; mother, Kathy, Bismarck; brother, Robbie (Tiffany) Chadron, Neb.; nephew, Sidney, Chadron, Neb.; grandmother, Lorraine House, Bismarck; and many aunts, uncles, cousins and friends who miss him already.

There will be a memorial fund set up for his daughter for any contributions and a celebration of his life will be held at some time in the future.

To order memorial trees or send flowers to the family in memory of Rollie Seidel, please visit our flower store.