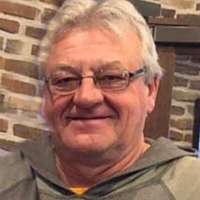 Ron Fiechtner, 67, passed away in a single vehicle accident two miles south of Butte on April 2, 2021.  Funeral services will be held 10:30 a.m. Wednesday, April 7 at Good Shepherd Lutheran Church, 106 Osage Ave., Bismarck. A service livestream will be available on the church's Facebook: https://www.facebook.com/goodshepherdbismarck/

Visitation will be held from 5:30 to 7 p.m. Tuesday at Parkway Funeral Service, 2330 Tyler Pkwy, Bismarck. A prayer service will begin at 7 p.m.

Those attending the services, wear your NDSU Bison gear in memory of Ron.

Ronald Alvin Fiechtner was born September 29, 1953 to Victor and Mildred (Bilke) Fiechtner.  He was the second of three sons to Victor and Mildred, with older brother, Kenny, and younger brother, Jay. He was raised on their farm near Monango until the family moved to Turtle Lake his freshman year and graduated from Turtle Lake High School in 1971.  He was a gifted athlete and went on to play football and basketball at Bismarck Junior College then moved on to play football and basketball at Minot State.  After college he worked for Northwest Contracting, doing many different jobs in the construction offseason.  In 1989 he was hired by Melroe as weld shop supervisor.  He worked there until his retirement in 2009.  He enjoyed the lifelong friendships he made there.

Ron was married to Mary King on August 18, 1978 and had two children, Zach and Nikki.  The family enjoyed spending their summers camping and fishing at Indian Hills among other places, a tradition which continued until the last summer of Ron’s life.  Ron was also a great softball player and played for many years.  During the school year, Ron was busy refereeing basketball games which he did until 1998.  Ron was inducted into the North Dakota Referee Hall of Fame in 2003.

Unfortunately, Mary was diagnosed with brain cancer in 1996.  Ron was a loving and devoted caregiver to her until her passing in 2002. After raising his children in Bismarck, Ron moved to Butte in 2014, where he found a true connection to the community and neighbors who became dear friends.  He served as the City of Butte’s Auditor and enjoyed mowing the lawn at St. Paul Lutheran church.  Following his move to Butte, he would often brag that he had all the hunting and fishing he wanted right outside his back door!

Ron was an avid fisherman and hunter.  He and Zach enjoyed their yearly Fall deer hunts at their Badlands bunkhouse with friends, Andy Reimnitz, Todd Schimke, Steve Kuntz and Ron Lipp.  Ron was also a die-hard fan of the NDSU Bison.  He always enjoyed his trips to Frisco, TX, to celebrate the Bison football championship games.  It was a rare day when Ron was seen NOT wearing Bison attire!

In his later years, Ron found a new passion in life:  his grandsons.  He was planning many future fishing and hunting adventures with Army (4), Shade (2), and Ole (10 months).  Ron was lucky enough to find love again later in his life when he was reconnected with his high school friend, Gayle Redmond.  Gayle and Ron enjoyed spending time together with their children, grandchildren, and friends. They also enjoyed going to high school games and drives in the country.

Ron will be remembered by his friends and family for his booming voice and laugh which could be heard across the room.  He was an energetic, caring and generous man who was always willing to help a friend in need.  He will be forever loved, missed and remembered.  Hail the Bison!

Memorials can be donated to the MD Anderson Cancer Center.

To order memorial trees or send flowers to the family in memory of Ronald Fiechtner, please visit our flower store.