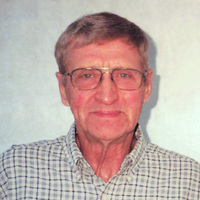 Ronald Chris Larsen, Bismarck, died March 17, 2021, with his family at his side.

A Memorial Service will take place at 1:30 p.m. on Monday, March 22, 2021 at Eastgate Funeral Service, 2302 E. Divide Ave, Bismarck. A service livestream will be available on the funeral home’s website listed below. Interment at North Dakota Veterans Cemetery, Mandan.

He was born in Burke County ND on November 17, 1935, the only child of Reuben and Signa (Hermansen) Larsen.  He attended elementary and high school in Flaxton and graduated in 1953. He began college at NDAC the fall of that year and continued there until entering the U.S. army. He was honorably discharged in 1958. He returned to NDAC and graduated from NDSU in 1961 with a Bachelor of Science degree in mechanized agriculture.

He married Ilene Knutson at Oak Valley Lutheran Church in Velva on June 12, 1960. They lived in Washburn, McClusky, Mohall and Towner while he worked as an assistant county supervisor for the Farmers Home Administration (now FSA).

They began farming in 1966 near Voltaire. While farming, he was active in the community serving on the Voltaire Township board, the Voltaire Farmers Elevator, Velva Grain Co. and Minot Farmers Elevator as the elevators merged. He was a 4-H leader and a member of the Oak Valley Lutheran Church Council.

After selling their farmland Ronald and Ilene remained on the farmstead where they started a business called Prairie Trail Enterprises and sold wood products made from old farm buildings across the USA.

He and Ilene moved to Bismarck in 2000 and became mission builders for the ELCA. They helped build or remodel churches in Minnesota, Arizona, Michigan and Montana.

His building skills were also used in many projects. At Liberty Heights in Mandan and the Classic Yard. He was employed at Menards since 2013. In his “spare time” he used his talents as a miniaturist by building a layout called ‘Prairieville’ for his N-scale model railroad layout which is an amazing work of folk art.

They spent many winters in Arizona, watching their grandchildren in school activities and helping Ann with many projects around her home.

He was preceded in death by his parents; sister-in-law, Cora Bush and many dear ones.

In lieu of flowers, memorials may be made to ND Heritage Foundation or ELCA Mission Builders.

To order memorial trees or send flowers to the family in memory of Ronald C. Larsen, please visit our flower store.