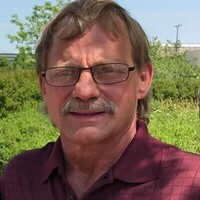 Ron was born September 8, 1958, nine minutes after his twin brother, Rodney, in Williston to Glen and Carol (Anderson) Salveson. Ron came into the world fearless. He was full of energy and enough mischief for a lifetime, a quality he made sure none of his five siblings would forget.

Ron graduated from Century High School in 1976. Following his graduation, he moved to Alberta, Canada, to work and play for a few years. Later, he moved back to Bismarck, where he met his former wife, Natalie Maershbecker. In 1986, Ron and Natalie were married and within a year, they moved to the Twin Cities region of Minnesota, where they resided for over 23 years.

In 1991, their son, Casey, was born. In 1994, their daughter, Rhonda, named after Ron himself, was born. Ron’s children were his pride and joy; he raised them with nothing but patience, lots of laughter, and unconditional love. Whether he was at sporting events for the kids, out fishing with Casey, or shopping with Rhonda, it was the highlight of Ron’s life to raise his children and support all of their passions.

Ron spent the majority of his career working in the Millwright Local #548 union until he retired in 2007. Ron was known for his meticulous craftsmanship, whether he was working with metals, woods, landscapes, or fixing broken household objects and equipment. He was a proud perfectionist and taught everyone around him that if they were to do anything, they needed to do it the right way or not do it at all. Ron had one of the strongest work ethics, a trait he made sure his children would also carry.

Ron loved to spend time fishing. He enjoyed rides on his ATV and motorcycles. When he could no longer spend his time outdoors, Ron loved to settle in front of the TV to watch his westerns. He was always down to play a game of cards, or Yahtzee. It made Ron happiest to spend all his time with his family, relatives, and friends.

Ron was a social butterfly and could make friends with everyone he met, both children and adults. He was loved by all those who had the honor of knowing him. He was selfless, charismatic, full of jokes and pranks, and lived to help others.

Ron was truly one of a kind. May his memory and impact live on forever.

Ron was preceded in death by his parents, Glen and Carol Salveson; twin brother, Rodney; and his grandparents, Carl and Della Salveson and Carl and Oline Anderson.

To order memorial trees or send flowers to the family in memory of Ronald Salveson, please visit our flower store.