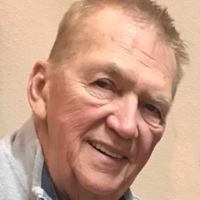 Ronald Vincent Sukauskas, 77, Bismarck, passed away on April 26, 2021 with his family by his side after a nine-year battle with cancer.

Ron was born November 19, 1943 in Brooklyn, N.Y., to Vincent and Dorothy (Lannigan) Sukauskas. At a young age, Ron worked at his parents diner as a “soda jerk” and spent most of his leisure time with his brother, Vinny, at Coney Island and Rockaway Park.

Entering the U.S. Army at the age of 18, Ron proudly served his country, stationed in Korea with the 7th Calvary, 82nd Airborne Division.

Ron worked as a Railroad Engineer for many years and was business owner in Bismarck for 25 years. He enjoyed fishing, pheasant hunting and traveling to Canada and Alaska. Ron could always be seen driving around town in his red Mustang with the top down with his companion, Max, by his side.

He had a special talent for landscaping, working endlessly in his yard with water fountains flowing and a light show at night. His favorite indoor hobby was collecting trains, sharing it whenever children came to visit. Ron was best known as “Grandpa Ron” to all the children who loved him, treating them with his endless supply of lollipops.

Very proud of his Irish heritage, he celebrated St. Paddy’s Day like no other. Having traditional corned beef and cabbage, decked out in his favorite garb going about his business like it was completely “normal.”

His retirement was spent wintering in Arizona and camping with family in the summer. Ron always made time for his friends, meeting at their favorite restaurants or taking in a good war movie. Never passing up a good pinochle game, his famous last words were, “I bid 40.”

Ron is survived by his wife of 43 years, Debbie; mother-in-law, Frances Smith; son, Ron and his daughter, Kendall, Calif.; daughter, Suzanne and daughters, Hailey and Ava, Wa.; son, Travis (Tana) and daughter, May Aspen, Bismarck; and many nieces, nephews and in-laws.

Ron was very “unique,” especially with his New York accent living in North Dakota. He was the butt of many jokes but took it wholeheartedly. In return, he always had an arsenal of jokes and pranks up his sleeve.

Ron’s love of his family and friends was shown by his endless surprises and gift giving when they least expected it. He was the life of family celebrations, impersonating Elvis, dressing up as Santa, “twirling” his favorite girls on the dance floor and outbidding everyone for the bride’s garter.

He was a very confident and caring man with a big heart and will be greatly missed. We love you and will keep you forever in our hearts. Ronald's Memorial Folder
To order memorial trees or send flowers to the family in memory of Ronald Sukauskas, please visit our flower store.