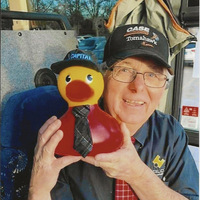 A burial service will be held at 11:00 AM, Thursday, September 8, 2022 at the North Dakota Veterans Cemetery, Mandan.

He’s survived by his wife, Mavis; children, Gene, Travis, and Brandee; stepdaughters, Sandra and Michelle; brothers, Robert, Roger, and Randy; and many grandchildren.

He was preceded in death by his parents; brothers, Richard, Roy, and Raymond and sister, Mary Lou.  Ron will be laid to rest with military honors at the North Dakota Veterans Cemetery, Mandan, ND.

A special thank you to Becky Gallion and the Capital Ice Synchronized Skating Team, their families and everyone for all your support.

To order memorial trees or send flowers to the family in memory of Ronald Watson, please visit our flower store.