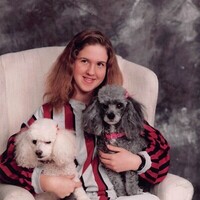 Ronda Kraft passed away unexpectedly in her home Feb. 3, 2021.  A private family service will be held.

Ronda Kay Kraft was born in Bismarck on Sept. 10, 1974 to Ronald and Lyla Kraft. As a small child, she overcame Leukemia, which at the time had no cure. As a child, she enjoyed gymnastics and riding her minibike around her home, wearing a track in the grass every year. She graduated from Bismarck High School.

She was always helping at the family store throughout high school and adulthood until her health prevented her from doing so. A lot of good times were had. She also loved Taekwondo, and over the years placed in many statewide tournaments, turning down a trip to Korea in her early 30’s related to her health. She finished as a 2nd degree blackbelt.

Ronda also loved taking guitar lessons and helping teach Taekwondo with her dear friends at Ehrmantraut’s Academy. She was also a yearly helper at Papa’s Pumpkin Patch in Bismarck.

Her passions were her pets throughout her lifetime. She had over eight dogs. Ronda always had two at a time and would call them her “kids,” and talked to them like they were.

Ronda was preceded in death by her mother, Lyla; and grandmother, Esther.

Her moral toughness, honesty, good nature and love of a good joke should be an example for all of us.

To order memorial trees or send flowers to the family in memory of Ronda Kraft, please visit our flower store.