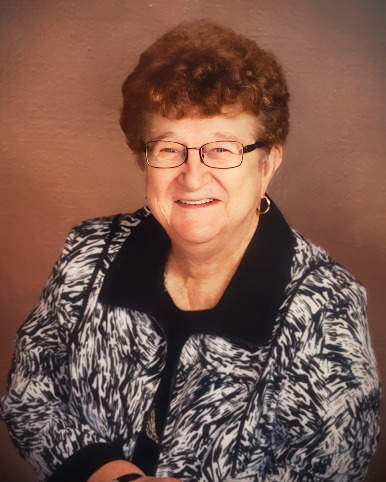 Rosalie Sue (Erickson) Fried, 84, Bismarck, left this earth to join our Savior early on the morning of Friday, January 20, 2023.

She was born on Feb. 23, 1938, to Carl and Olga Erickson and was raised in Driscoll, ND.  She graduated from Driscoll High School and then attended Ellendale College where she earned her teaching certificate.  She taught in a one-room schoolhouse for two years.  In Dec. 1958, she married Herbert Fried and they began their nomadic life moving for Herb’s jobs.  Daughters Lynn, Karla, and Carrie rounded out the family.

Later, Rosalie went to Mary College and earned her Bachelor of Science in Education and was able to teach grades K–12.  Rosalie taught in Menoken, Sterling, and Bismarck High School and was a substitute teacher throughout their moves that took them out of the Bismarck area.

Rosalie loved to be active and apart from being an engaged mother and teacher, she helped Herb remodel their homes, got her real estate license, and ran the Longhorn bar in New Salem. In 1984 Rosalie went to massage school where she found her true calling… she had the healing touch and helped family and friends well after retirement. When Rosalie turned 62 she began traveling in earnest.  Taking trips to all but 1 continent, going to the Holy Land one month after 9/11, China (twice), Australia, Fiji, New Zealand, Egypt, Europe, Scandinavia, all Canadian provinces’, and every state in the union. She was on 36 cruises that included Panama Canal, Mexican Riviera, Caribbean Islands, Hawaiian Islands, South America, Russian riverboat cruise, New England Fall cruise.  Some of her favorite adventures included swimming with stingrays and dolphins and flying in a hot air balloon over the Australian plains while watching a mob of kangaroos hopping below.

Rosalie loved her seven grandchildren and enjoyed spending time with them, taking them on adventures, teaching them to cook Norwegian goodies and how to sew, taking the granddaughters to Deadwood to teach them three card poker, and watching Duke Men’s basketball (and taking in a few games in person).

She genuinely believed that the only thing that would limit you was your frame of mind.  So, the word “can’t” was simply not allowed.

Rosalie was fun, feisty, and a bit sassy.  Her passing has left a huge hole in our family, but she taught us to persist. So, we will carry on and be thankful to have shared her life. She is survived by her daughters, Lynn (Greg) Doll, Bismarck, Karla (Duane) Hill, Bowman, and Carrie Avalon (Jim Neidhardt), New Salem;  Seven grandchildren, LaTeia (Grant) Kolling, Emily (Blake) Kvidt, Laura (Anthony) Humes, Matt (Tess) Morgan, Jessica Hill, Kaitlyn Hill, and Mitchell Tubbs-Avalon; nine great-grandchildren, Leah and Blake Kolling, Ambrose, Dominic and Anthony Kvidt, Jaxson and Maverick Morgan, Ruby Hill, and Teddy Humes; brother-in-law and sister-in-law, Ardean Aafedt and Joyce Erickson, Williston; numerous relatives; and a world of friends.

Memorials may be made to the Central Dakota Humane Society,  2104 37th St, Mandan, and the Bowman Regional Public Library, 18 E Divide St, Bowman.

To order memorial trees or send flowers to the family in memory of Rosalie Fried, please visit our flower store.

A prayer service and time of sharing will begin at 7:00 P.M.