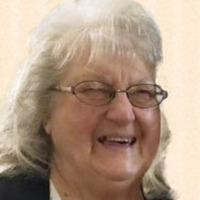 Rose Mae (Schneider) Stewart passed away at 1:20 p.m. on Friday, February 11, 2022 with her family by her side at the Sanford Medical Center in Bismarck, North Dakota.

Visitation will be held one hour prior at the church.

Rose was born on her parents' farm by Driscoll, North Dakota with the help of a midwife on January 25, 1934. She was very proud to be the daughter of immigrant pioneers. Rose loved music. She could sing beautifully but she couldn’t yodel like her older sister Violet so when she would walk out in the pasture to bring the cows home she would practice and practice...until she could finally yodel. During the Wing, North Dakota Rodeo, Rose would often sit up in the Crow’s Nest, play her guitar, sing and yodel during the slack times.

Rose met Leslie at a friend’s jam session where they were singing and playing guitar. They were married December 21, 1958. They had four children, Kimberly, James, Patrick, and Darin. Rose loved her children so very much and lived each day to make their lives the best they could possibly be. She loved riding horse with them, teaching them to trap, and to hunt. Rose often told of escapades she and her siblings had hunting when they were younger. It’s no wonder her children love guns and hunting as much as she did. Mom always tried to make everything fun!!! Even if we were just sitting in the car waiting for Dad, she would make up silly game to play with us. She was always trying to make us smile or laugh.

Rose and Leslie were a team when it came to ranching and farming. Leslie could always rely on Rose to milk the cows if he stayed in the field longer than planned. It was never unusual to see them both working in the field together once the kids were in school or old enough to be home alone. Working cattle was a family affair and they still loved each other when it was all said and done.

She was well known for what a good cook she was...if you left the farm hungry that was your fault because she definitely would put a plate of food in front of you if you made it in the house. It wasn’t unusual for her to send you home with a loaf of her famous homemade bread under your arm. Leslie loved his meat and potatoes for his meals, but he had to have a couple slices of his wife’s homemade bread with every meal. Rose would make her own pizza crust recipes and anything else to save money but still give her family a treat. As one of our friends said, “she was the best Chinese food cooking German on the planet.”

Rose often commented on the fact that she “only had an eighth-grade education” but she was so intelligent and talented!! While she was still living at home with her parents, one of her first jobs was working for a rancher. She would move their cattle out to pasture three miles away and bring them home for miking again. They liked Rose so much they wanted to give her their horse she was riding. Rose then worked for Topps Café in Sterling and eventually the Café Counter in Woolsworth when she moved to Bismarck. As she was working at Woolsworth a gentleman from the Bismarck Tribune, who ate there often, offered her a job as an operator at the Tribune. She really loved that job and was excellent at it. Years later, when times were hard on the farm, Rose started working at St. Vincent’s Nursing Home to help supplement the income. She started out as a cook's assistant and worked herself up to a head cook. She had to learn a lot of different diets and actually cook with recipes instead of the dump and pour that she was so use to...but she picked it up fast and excelled at it. The residents always knew when Rose was the cook. She retired after almost nineteen years and enjoyed being home full time with her family.

She loved animals of all types-especially German Shepherd dogs. Kimberly gave her one of her favorite dogs just before she retired and he was by her side for years. Strays would wander onto the farm and Rose would beg them into the yard and take care of them. Darin and James have a black lab that would crawl under Mom’s chair and hide when he got in trouble looking for mom's protection. Even though he doesn’t fit anymore he still tried to get under there.

The boys found a kitten one time that was too young to be without its mother and Mom nursed it with an eye dropper until it was large enough to eat on its own.

When a little chick got stepped on by one of its flock she gave the injured bird therapy every day until it was better.

Rose loved bird watching, gardening and growing flowers. Rose loved God!!! It is believed she had a direct line of prayer straight to Heaven. Knowing that Mom was praying for us always brought a sense of relief to us.

Rose is survived by her children, Kimberly, James and Darin; her siblings; Violet Miller and John Schneider; her sisters-in-law,Judi Schneider and Doris Carlson and many nieces and nephews.

She was preceded in death by her son, Patrick; her husband, Leslie; her parents, Henry and Kathryn Schneider; her siblings, Henry (Hank), Bertha Lein, Dora Proctor, Joseph, Elsie Thompson, Herb, Bill, and Donald.

To order memorial trees or send flowers to the family in memory of Rose Stewart, please visit our flower store.