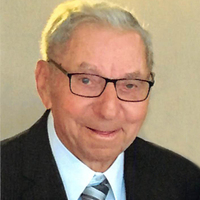 Visitation will be held from 5 to 7 p.m. Wednesday at Eastgate Funeral Service, Bismarck. A prayer service will be held at 7 p.m.

Burial will be held at Arena Cemetery, Arena.

Ruben was born August 9, 1929 on the family farm near Arena to Herman and Margaret (Holwegner) Rachel. He attended school in Arena and farmed on the family farm for his entire life. On June 10, 1952, Ruben married Laverne Lein at Bethlehem Lutheran Church in Wing. To this union, four children were born.

He served on several boards and committees in the Wing area.

He was preceded in death by his parents; three sisters and brothers-in-law, Hilda (Clarence) Sandberg, Isabel (Edwin) Liuska and Anna (Henry) Wagner.

The family requests memorials be sent to the Bethlehem Lutheran Church, Wing, ND 58494.

To order memorial trees or send flowers to the family in memory of Ruben Rachel, please visit our flower store.