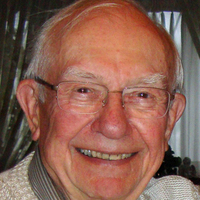 Russell was born near Oriska on February 15, 1928, to Emil Lorenz and Christine (Jensen) Lorenz. He grew up on the family farm and graduated from Weimar #34 and Oriska High School.

Russell proudly served in the United States Navy from 1946-48, holding the rank of Petty Officer 3rd Class, Specialist X, where he helped implement some of the earliest computerization of military record keeping.

After the Navy, Russell pursued his bachelor’s degree in Agronomy at NDSU, during which time he met and eventually married his beloved Joan, and they began married life in student housing on campus.

He began his career as a Research Agronomist at the Northern Great Plains Research Center in Mandan. During his many years at the field station, Russell continued to advance in responsibilities and education, eventually earning his doctorate in agronomy, plant science and biochemistry.

Russell authored more than 40 technical and popular publications and served in a number of different roles of responsibility, including as director of the research center and technical advisor for the Northern Great Plains and Alaska.

He was known as Dr. Leafy Spurge. After retirement, Russell began working with NDSU and the governor’s task force further the eradication of invasive plant species with a particular focus on leafy spurge eradication.

Russell was a life long Catholic, having attended various parishes in Bismarck, where he actively participated in liturgical readings, song leading and CCD classes.

He was active in the Knights of Columbus and served as a Grand Knight. Russell enjoyed his memberships in the Elks, Eagles and VFW. Russell loved hunting and fishing and was a devoted Louis L’Amour reader and collector.

He was preceded in death by his parents; older brother and sister who died in infancy; and sister, Marge (Oscar) Horner.

To order memorial trees or send flowers to the family in memory of Russell J. Lorenz, please visit our flower store.