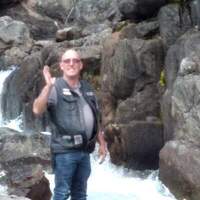 Scott was a wonderful Husband, Father, Grandfather (Gpa), Son, Brother, Uncle and Friend to those who received the pleasure of meeting and knowing him. His family didn't stop with just the bloodline, anyone who met Scott thought of him as 'Dad' or an extra Brother.

Scott was a family man, enjoyed going on many adventures with his wife. They loved day trips, weekend getaways and over the past few years enjoyed including his sister-in-law, Paula on as many outings as their schedules allowed. Scott and Chris did everything together, it was uncommon to see them apart unless it was due to work scheduling. Their love, so genuine throughout their 35 years of marriage.

His daughters: Jenna and Kristi had his love from day one. Each of them had their own special bond with him and created many special memories personal to their relationships.

Scott was affectionately referred to as Gpa (or Goofypa) to his 7 amazing grandchildren. Each of them putting smiles on his face from the jokes that were told, the pictures drawn, the hugs received. Between the stories they would tell him or if they confided any grievances, he always had an ear to listen. He especially loved sharing his hot wheel collection with them, passing along a duplicate he may have inherited by mistake just to see the joy on their faces when they received one from him.

Scott avidly collected hot wheels and matchbox die cast toys. To some it seemed silly, but to Scott, it was a favorite pastime he relished showing off.

Scott also loved riding his motorcycle. As often as he could get the 2 wheels on the pavement, he did. Either alone or with his wife on the back, he would always have a smirk on his face. Being a part of the Brothers Keepers Motorcycle club in Bismarck filled him with pride. To be a part of the brotherhood shared and gain the comradery, help with the community were things that he took to heart. The love for his brothers and motorcycle went hand in hand with the love he shared for his family and life.

He loved music of all kinds, but his favorite was the 70s and 80s. It was never a surprise to see him singing or dancing or even trying his hand at karaoke a time or two. He enjoyed playing darts, was a part of many teams/championships. It was with great skill he threw darts with proficiency while participating in some shenanigans on the side. Always a goofball!

Scott had many working experiences to fulfill his days. The old saying holds true about Scott being a jack of all trades, a master of none but often times better than a master of one. His many jobs usually revolved around people. He put his heart into every job he held; and did everything from A to Z it seems giving 150% of himself over the normal 100- He dabbled in cleaning carpets, was a farmer, a CNA, a cook at several restaurants including Farmers Livestock cafe, a plumber, store clerk, tow truck driver, maintenance and many more. Most recently, he prided himself on his employment with Bisman Transit. He drove both the CAT and transit buses providing safe transport for his passengers whom he saw as friends. He loved driving all the time anyways, but the perk of getting paid to do so made this all the better. He knew a lot of shortcuts around town to avoid traffic and construction which helped achieve his goals with accuracy in getting his clients from point A to B safely and on time.

He enjoyed helping where he could and couldn't say no to helping with anything (it just wasn't a word in his vocabulary.) Not just at work, but with his family and friends as well. - His daughters may have taken advantage of this a couple times in their younger years!

He will be missed by all who knew him.

Scott joined his father in heaven who has been there since 2017 and was warmly greeted by many family and friends to welcome him home.

To order memorial trees or send flowers to the family in memory of Scott Culver, please visit our flower store.