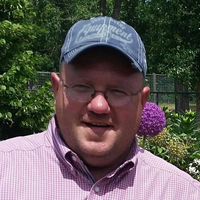 Scott Kraft, 47, Bismarck, passed away on April 26, 2021 after a courageous battle with cancer. Mass of Christian burial will be held 11 a.m. Saturday, May 1 at Church of St. Mary, 806 E Broadway, Bismarck. A service livestream will be available on the funeral home’s website.

Visitation will be held from 5 to 7 p.m. Friday at Parkway Funeral Service, 2330 Tyler Pkwy, Bismarck. A prayer service will begin at 7 p.m.

Scott was born on December 21, 1973 to Casper and Sandy (Schantz) Kraft. He graduated from Bismarck High School in 1993. He worked for Stockmen’s Supply, Kist Livestock and Jim Small. Prior to his illness, he was employed with North American Coal (Falkirk Station) where he was a heavy equipment operator.

He helped many friends and family through high school until he was not able to with haying, seeding, working cattle and mechanic work. Where there was a problem needed to be solved, Scott was found.

Scott was an old soul with a huge heart. He never complained about what cards he was dealt. He was one that would do anything for anyone. Scott was an avid John Deere collector. He would spend many hours driving with friends looking for that great John Deere deal. He enjoyed going to auction sales. Scott spent many hours and holidays with the Olson family and friends playing cards, teaching life lessons to the kids or talking “philosophy.”

Scott is survived by his parents; brother, Steve (Amber); nephew, Carter; and many aunts, uncles, cousins and friends. He is also survived by three very special small friends: Hailey (goddaughter), Hayden and Hadlynn Olson. They were his right-hand man and ladies. Scott instilled many great things into them. He told them to always live by his saying, that once a man gives his word it is worth gold. Scott always kept his word with them.

He was preceded in death by his paternal and maternal grandparents; uncles, Ken Schantz and Roy Small; and cousins, Nicole Schantz and Jesse Schantz.

To order memorial trees or send flowers to the family in memory of Scott Kraft, please visit our flower store.