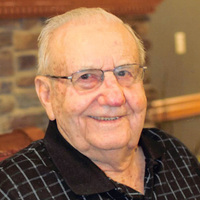 Sebald J. Nagel, 97, Bismarck, went to be with his savior on Dec. 12, 2021, surrounded by his loving family. Mass of Christian burial will be held 10:30 a.m. Saturday, Dec. 18 at Church of St. Anne, 1321 Braman Ave., Bismarck. A service livestream will be available on the funeral home’s website, listed below.

Visitation will be held from 5 to 7 p.m. Friday, Dec. 17 at Parkway Funeral Service, 2330 Tyler Pkwy, Bismarck. A rosary/vigil service will begin at 7 p.m.

Sebald was the first-born child to Joseph and Carolina (Zacher) Nagel on April 9, 1924.  He attended rural school through the eighth grade while working on the family farm and assisting local farmers. He also worked for the Linton Elevator.

Sebald met the love of his life, Loretta Bauman, at the Pin Palace Lanes in Strasburg.  On August 24, 1948, they were married at St. Anthony Catholic Church in Linton, where they began a 72-year life together.

Shortly after they were married, Sebald and Loretta purchased a farm 10 miles north of Linton where they owned and operated a grain and livestock (Hereford cattle) farm.   They became members of St. Paul’s Catholic Church in Hazelton. Sebald loved farming with Loretta, but more than anything his greatest pride came when he spoke of his eight children.

Sebald was on the Board of Directors for the Temvik Elevator, the Hazelton School Board, and the Linton Fire Department.  He is a lifetime Knights of Columbus member and a 4-H Leader.  In 1981, they moved to Linton and Sebald drove out to the farm every day for years, making sure it was operated to his standards.  In 2007, the couple moved to Bismarck. He bowled on a men’s and couples league, thoroughly enjoyed fishing, playing pinochle, and taking road trips to the casino.

He was preceded in death by his soulmate of 72 years, Loretta Nagel; his parents, Joseph and Carolina (Zacher) Nagel; brother and sister-in-law, Elias (Alvina) Nagel and Lawrence Nagel; brothers-in-law, Howard Schuh, Thomas Blakeway and John Bailey; and sister, Magdalena Nagel.

A special thank you to CaringEdge hospice for their amazing care of our mother and father.

To order memorial trees or send flowers to the family in memory of Sebald J. Nagel, please visit our flower store.