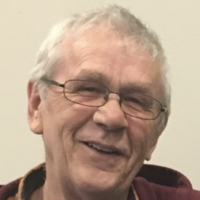 Sebastian was born in Rugby, North Dakota, on July 30, 1952, the third son of Michael and Inez (Hust) Kambeitz.  When Sebastian was a young boy, they moved to Carrington.

He was united in marriage to Candice Erman on February 9th, 1974.  From this union they were blessed with three amazing children Wendy, Jessica, and Cody, who he loved dearly.  He was immensely proud to be their dad, a grandfather, and most recently a great grandfather.   He loved that he was able to follow them though social media.

Sebastian spent fifty years of his life behind the wheel of a truck.  His all-time favorite was the Peterbilt.  He spent many years out west in Idaho and often spoke of returning someday.

He was preceded in death by his parents, Michael and Inez; one brother Michael (Mikey); and a sister, Linda.

To order memorial trees or send flowers to the family in memory of Sebastian Kambeitz, please visit our flower store.