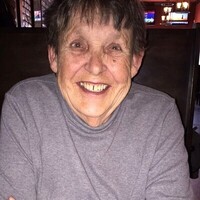 Sharon was born on Dec. 6, 1942, to Henry and Esther (Lampsa) Josephson of Bismarck. Sharon grew up in Bismarck, Valley City and Oklahoma City, Okla. She graduated high school in 1960 from Oklahoma City.

Sharon married Eugene Miller on March 27, 1966 in Bismarck. They had two children, Daniel and Cheryl.

In 1981, she returned to school and obtained an associate degree in Hotel Motel Restaurant Management from Bismarck Junior College in Bismarck.

Sharon loved traveling around the United States with friends and family, and even traveled to Belgium, France and England when her daughter and grandchildren lived in Belgium.   She had a soft spot for pull tabs and a good game of Bingo. Sharon had the luck of the Irish and would share her winnings with those around her.  Once telling her daughter, “Here’s $50, you need a haircut.”  Up until she entered Missouri Slope, Saturdays were spent with family shopping and having lunch.  Her greatest joy was her children and grandchildren. She loved telling EVERYONE about them.

She worked in several jobs throughout her life: from picking beets, cleaning the senior center, working with her husband at his snack bar, Gene’s Place, as a direct support professional and finally as Walmart Associate until she retired.

Sharon was a fun, quirky and spontaneous person who was not afraid to jump in to participate in whatever her friends and family were up to. She will be remembered fondly for quick wit, consistent phone calls and resilient spirit.

She was preceded in death by her parents, Esther and Henry Josephson; husband, Eugene Miller; sisters, Eldora, Gerda, Dorthea and Lucille; and brothers, Owen and Marvin.

In lieu of flowers, memorials may be made to North Dakota Alzheimer Association or the front-line workers at Missouri Slope Lutheran Care Center.

To order memorial trees or send flowers to the family in memory of Sharon Miller, please visit our flower store.