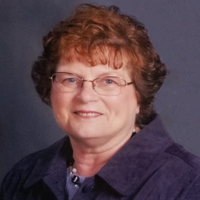 A service livestream of Shirley's funeral service will be available beginning 11:00 a.m. at this link: https://www.youtube.com/channel/UCsB8ED1ZzpkCrcFQV-VFL6Q

On March 25, 2021 heaven gained an angel as Shirley Maye Berg was called to her Heavenly Home with her family by her side.

Viewing will begin at 6:30 pm on Thursday, April 1 at St. John’s Lutheran Church in Tappen with a prayer service at 8:30 pm officiated by Pastor Gerhardt Juergens. Funeral service will be held at 11:00 am at St. John’s Lutheran Church on Friday, April 2, 2021. A live stream of the two services will be available on St. John’s website via Youtube. Interment will follow at Fisher Cemetery north of Tappen. All are invited to stay for lunch and fellowship at the church.

Shirley was born south of Tappen in Peace township on March 19, 1943, the second daughter of Walter and Frieda (Werre) Martin. She attended Tappen Public School through the 12th grade graduating in 1961. She then attended the State Teachers College in Valley City pursing a degree in Music Education. Upon receiving her lifetime teaching certificate she began teaching music in Oberon, ND.

In 1966, she futhered her career by taking a position teaching music at Wing Public School, where she met Dale Berg. On August 6, 1967 they said their vows to never part, two months prior to Dale leaving for basic training in Fort Lewis, WA. After completing the school year, Shirley traveled out to Fort Ord, CA to be with Dale prior to him being deployed to Vietnam 1968. Shirley returned to Tappen and continued on with her teaching career. Upon completing his tour of duty, Dale returned to Fort Mead Maryland, where he was joined by Shirley before they were transferred to Germany.

In 1970, upon Dale’s honorable discharge from the Army, they returned to Tappen and began farming with her parents. In November of that year, they welcomed their first daughter, Dawn. Three years later in January, Deanna was born, finally in 1977 they welcomed their only son, Michael.

Shirley put her teaching career on hold to raise their children and farm full time with Dale. She could be seen swathing grain, milking the cows, tending garden all while preparing meals and maintaining a clean house. Throughout her life Shirley was an active member of the St. John’s Lutheran Church in Tappen. She carried out the Lord’s work playing for church services, weddings, funerals, directing the choir, and writing and directing the Christmas Program for many years. Shirley also faithfully served the Lord all her life and along with Dale always shared God’s love and purpose with any in need. She loved baking and cooking and was always willing to try a new recipe. Many co-workers of her children were more than willing to be taste tester’s throughout the years. Shirley’s scalloped potatoes were known through out the land and could be found served at many a gathering.

She returned to teaching at Tappen School in 1989 until 1995 when Michael graduated from high school. Shirley’s career path changed as she worked for a short time as the dietary manager at the Golden Manor in Steele, and then for the Kidder County Extension in Steele. She retired in 2003 to begin her favorite, most rewarding and at times, most trying job of all, which was helping to raise her first grandchild, Bradyn. In 2005, the task became even more enjoyable when her second grandchild, Dylan was born.

Shirley and Dale enjoyed traveling and visiting friends and family. One of their most memorable trips was to Disneyland with their grandsons. She also enjoyed traveling to county fairs across the state to watch Bradyn and Dylan show animals during the summer. This was an was almost weekly event including a week at the ND State Fair. Shirley could often be seen holding a goat or sheep around the outside of the show ring or babysitting Dottie the “show dog” which she continued to do until she passed. Although she only had two grandchildren of her own she was known as “NANA” by all. She was the true meaning of the word “Grandma” spoiling any child that entered her home. She was immensely proud of family especially her Grandsons, who next to Dale, were the greatest loves of her life.

Shirley is survived by her children, Dawn Thompson, Bismarck; Deanna Berg (Matt Lachenmeier) and Michael Berg, Hazen; grandchildren, Bradyn and Dylan, Tappen; sister, Gloria Kemmet, Tappen; numerous nieces and nephews and their families as well as an “adopted extended family” that had no end. She was preceded in death by her brothers-in-law Alton Kemmet and Dean Heinle, son-in-law Roger Thompson, both parents Walter and Frieda Martin, mother and father-in-law Ernest and Bernice Berg, but most importantly by the love of her life for 53 years, Dale. She survived 46 days after his death,  passing away from a broken heart. Through thick and thin they remained by each other’s side without ever knowing someone who they didn’t consider a friend. Their house and hearts were always open to all.  Every person who entered left as family with full stomachs, happy hearts, and filled souls. Her Legacy will be felt by many for years to come. She will truly be missed.

The family prefers memorials be given to St. John’s Lutheran Church in Tappen, or The Baptist Health Care Center in Bismarck.

To order memorial trees or send flowers to the family in memory of Shirley M. Berg, please visit our flower store.