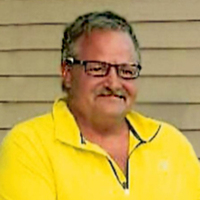 Theodore J Heidrich, 53, Mandan passed away due to a motorcycle accident on Friday, April 9, 2021.

Ted was born on October 17, 1967 to Charles and Glorian (Braun) Heidrich in Bismarck. He attended school at St. Mary’s in Bismarck.

In 1981 Ted and his family moved to Texas where he finished school. After school Ted started to work in construction. Ted also started to do mechanic work and found he was a natural at it.

Ted was not one to stay in one place too long. He considered each job a new adventure. He loved the outdoors and would live in a campfire environment as long as the weather would allow it.

Ted had a lot of nieces and nephews that enjoyed when he would visit, he was their favorite Ted.  A few of the nephews called themselves Teddy Juniors, even Ted’s friend’s children all called him Uncle Ted.

Ted will be missed by many, especially his father, Charles Heidrich, Bismarck; his brothers, Doug (Jennie), Casper Wyo., Mark (Fran), Linton, Russell (Candy), Bismarck and Timothy, Bismarck as well as his aunts, uncles, nieces, nephews and great nephews and nieces.

He was preceded in death by his mother Glorian; brother, David and grandparents.

To order memorial trees or send flowers to the family in memory of Ted Heidrich, please visit our flower store.