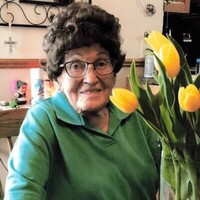 A livestream of the service will be available McCabe's website: https://www.mccabechurch.com/

Visitation will be held from 3 to 6 p.m. Sunday at Eastgate Funeral Service, 2302 E. Divide, Bismarck.

Interment will be held at Sunset Memorial Gardens, Bismarck.

Theodora "Teddy” Klemetson was born on June 21, 1936, to Leonard and Mabel (Kindseth) Slette in Mahnomen County, Minnesota, the youngest of three children. After school she helped on the family farm. On June 19, 1955, she married William Klemetson and then moved to the farm in Hillsboro, ND. Together they raised four children.

In 1969, they moved to Bismarck where they started up a Bonanza Restaurant. They then opened Bonanza's in Mandan, North Dakota; Dickinson, North Dakota; Billings, Montana; Waterloo, Iowa; Cedar Falls, Iowa; Davenport Iowa; and East Moline, Illinois. They also owned the Skyline Motel in Bismarck all while continuing to farm in the Bismarck and Hillsboro area. They retired from farming in 2012.

She was preceded in death by her sons, Lynn and Andy.

To order memorial trees or send flowers to the family in memory of Theodora Klemetson, please visit our flower store.